IF you’re going to call your band Garbage, then you better be good. And from the moment the American-Scottish alt-rockers burst on to the scene in August 1995, with a game-changing debut album that blew away the remnants of grunge, it was clear they were that little bit special.

Shirley Manson, the band’s feisty lead singer, famously declares in one of their early hits that she’s “only happy when it rains”, so she must have been delighted with the weather at her homecoming. Outside the Usher Hall – which was illuminated in the blue, white and red of the French Tricolor in honour of those that lost their lives in the Paris attacks – incessant rain lashed the pavements on Lothian Road. Meanwhile, inside the venue, local lass Shirley and her genre-bending band were going down an absolute storm as they celebrated 20 years since the release of their four-million-selling debut with a blistering set.

Earlier in the week, Stockbridge-raised Shirley made headlines after she announced to a London crowd that she’d forgotten to put her knickers on before going on stage – but if she was going commando in the Capital then she was keeping schtum about it.

Certainly, there was nothing pants about the way the band’s force-of-nature frontwoman worked a sold-out Usher Hall on the final night of the band’s tour, alongside bandmates Butch Vig, Steve Marker, Duke Erikson and touring bassist Eric Avery.

The evening kicked off with the band projecting candid footage and press coverage from the early days on to a large curtain that obscured the stage. When the curtain dropped at the end of opener Subhuman, the venue erupted.

Saying how glad she was to be home, Shirley, with her hair dyed pink for the occasion, told the crowd it “must have been 13 years” since they last played in the Capital.

Many of Garbage’s gigs in this neck of the woods have been open-air affairs, and Shirley’s voice sounded better than ever thanks to the amazing acoustics in the Usher Hall. 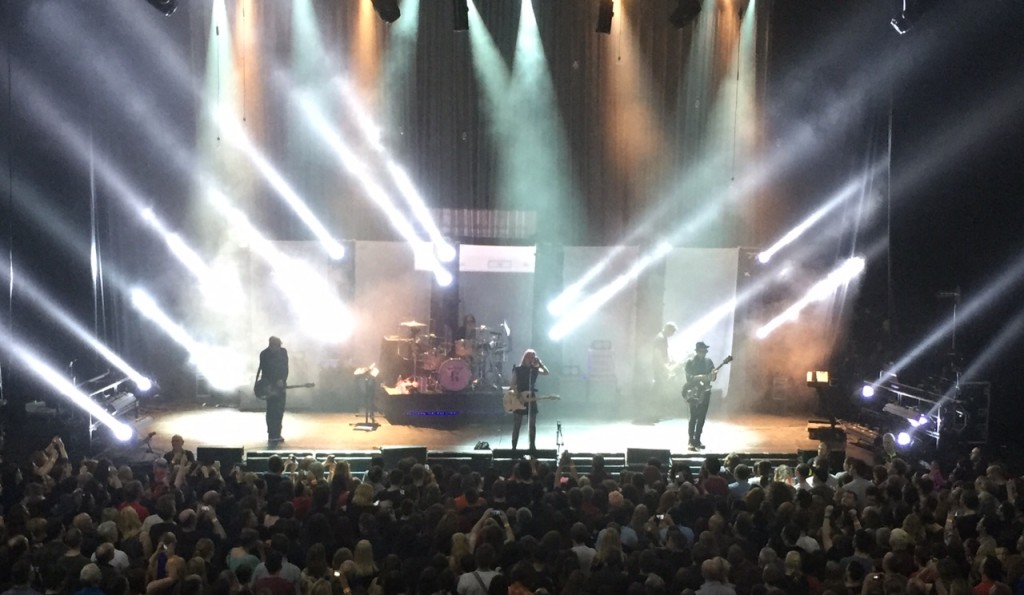 Midway through the gig, the 49-year-old singer stopped the music to address the Eagles Of Death Metal tragedy in Paris the previous night, during which some of her own crew lost friends and loved ones.

“Be kind. Be tolerant. Be forgiving. Be educated,” she said. “I want us to choose life over fear. I want us to pray for those who lost their lives. It has nothing to do with Muslims around the world – 1.5 billion peace-loving Muslims who feel exactly the way we do. So we must unite. We must be peaceful. Right, let’s get on with the show…”

Highlights of the set were fairly predictable – the airing of fan favourites like Supervixen, I’m Only Happy When It Rains, Stupid Girl, Vow, Not My Idea and Queer – but in a two-hour set consisting solely of tracks from 1995 and 1996, the die-hards will have delighted in hearing several obscure B-sides from the band’s impressive back catalogue.

The best asides from the main album included the shouty Girl Don’t Come, a song about “girls being equally as satisfied as boys”, and covers of both The Jam’s The Butterfly Collector and Vic Chesnutt’s Kick My Ass.

With this epic and triumphant celebration of their debut now behind them, Garbage will return next year with a brand new album and, fingers crossed, a UK tour that brings Shirley back home to a city that clearly loves her.

As Heaven Is Wide

A Stroke Of Luck

Only Happy When It Rains