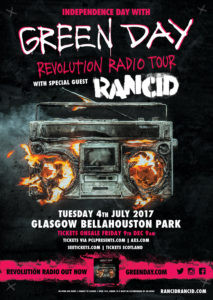 Having amassed in excess of 75 million album sales to date, the show is in support of their 12th studio album, Revolution Radio, which was released by Reprise Records in October this year.

Main support for the show will come from Berkeley, California’s punk-rock icons, Rancid, who last year re-issued their seminal record …And Out Come The Wolves’on it’s 20th anniversary.

Tickets will be available for purchase this Friday (December 9) at 9am via Pclpresents.com, Seetickets.com, AXS.com and Tickets Scotland.

Produced by Green Day and recorded in Oakland, Revolution Radio is a potent 12-track blitz of angst-ridden anthems that unites the band’s fully-formed stylistic approach with lyrical themes that address the complexities and uncertainties of modern day existence.

Musically, the album is raw, visceral, and fearless – solidifying the band’s reign as one of the leading voices in rock music. Inspired by recent events, the first single Bang Bang marks a welcome return from a band with more to say than ever.

When discussing the album with Rolling Stone magazine recently, singer Billie Joe Armstrong said, “The first song where I was like, ‘OK, I’m onto something’ was Bang Bang. And then the first track of the record, Somewhere Now. I started doing demos and I showed them to Mike and Tre. That’s the test. And they absolutely loved it.”