South Carolinian grungers Heyrocco will be making their return to UK shores this autumn with a run of ten dates, including a stop off at Sneaky Pete’s in Edinburgh on October 8.
Their first UK tour at the end of last year brought their explosive live show to a rabid audience, including a sold out show in front of 1,400 people for Club NME @ KOKO.
They also have been lighting up the radio airwaves with support from Zane Lowe, Huw Stephens and Phil Taggart at Radio 1, alongside XFM & Kerrang Radio.The band’s last visit, in April this year, saw them tour with Scottish rockers The Xcerts, and perform their own packed out show at London’s Seabright Arms in front of an army of dedicated teenage followers.
Heyrocco will be back to further promote their awesome debut album, Teenage Movie Soundtrack, which has been descibed as a perfect marriage of grungy angst and bubblegum pop. 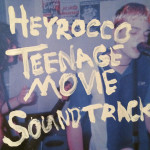 Often compared to the likes of Nirvana, Pavement, The Cure and Mudhoney, the album is packed to the rafters with gargantuan choruses, sludgy guitar hooks, and boasts stellar made-for-radio melodies.
Nathan (vocals & guitar), Chris Cool (bass) and Tanner ‘Taco’ Cooper (drums) first plugged-in the amps in their parents’ garages five years ago and were soon touring across the United States in their beaten up old van.
Building on the three-piece’s ever-increasing buzz, Heyrocco’s brand of 90s-inspired ‘Disney grunge’ is connecting with a whole new generation of fans.

Heyrocco’s debut album, Teenage Movie Soundtrack is out now. Here’s what some critics said about it.

“The angst-ridden grunge of Nirvana, while flecks of Pavement ensure a distinctly nostalgic flavour to these guitar heroes” – NME
“’Teenage Movie Soundtrack’ is the perfect riposte to all the navel-gazing sad boy stuff the others specialize in. Dive in and get stoked on it.” – Rock Sound
“Set in high school, with its corrosive mixture of The Cure and Mudhoney
conjuring up all manner of adolescent fury” – Clash