This week’s High 5 comes from James Dean Divine, whose hilarious autobiographical novel, The Lost Tornado, has just been published (more about the book below). Jim grew up with nine siblings in one of Edinburgh’s less affluent areas and had two big dreams as a youngster: to play for his beloved Hibs, or failing that, become a graphic designer. Turning out for the Cabbage proved a step too far, but at least Plan B worked out for him, as Jim now works as Creative Director at a marketing and ad agency in the Capital.

Glengarry Glenross. A film that’s always slipped under the radar of the mainstream. I saw this film way after its release and loved it. I’ve watched it a hundred times and hope to see it again. Al Pacino, Jack Lemmon, Alec Baldwin, Ed Harris, Alan Arkin and Jonathan Pryce – what a cast.

Has to be OMD’s first hit, Electricity. This song was the catalyst in me starting my own band in the 80s called  The Audette Syndrome.

Ultravox – The Vienna Tour at Tiffany’s night club. It was my first gig and they opened with a synthesiser going mental along with lasers blasting the room, I was hooked.

Asimov’s I Robot, closely followed by Allan Guthrie’s Hard Man and Tony Black’s Paying for it. 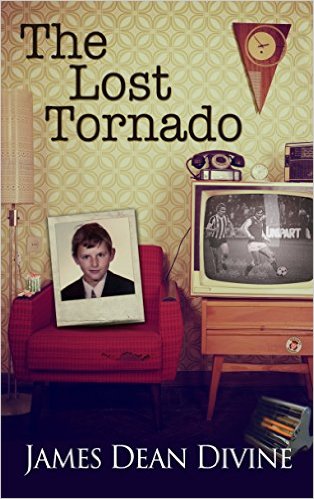 About The Lost Tornado
From an impoverished Edinburgh childhood, where Dad tapped the electricity supply from the street lamp outside their Pilton home to provide heat for the ten kids, to breaking into the altogether brighter lights of the advertising world, Jim Divine has seen off many a storm. His hilarious autobiographical novel recounts the highs and lows of a life spent searching for answers to the big questions: Will I be playing for Hibs on Saturday? Was that Joanna Lumley I spotted down Leith Walk? And just how the hell did I manage to avoid killing those three people? The Lost Tornado is a whirlwind trip down the most brightly-coloured memory lane, where an everyman’s everyday battles become the stuff of comic brilliance. ‘A cross between Kes and Angela’s Ashes’.

The Lost Tornado, by James Dean Divine, available now in paperback from Amazon, priced £9.99, click here to buy the book