As well as collaborating with Kieran ‘Four Tet’ Hebden in their original band (Fridge) and Johnny ‘Pictish Trail’ Lynch in Silver Columns, Adem has previously released three solo albums. But, something of a pop polymath, he’s had his fingers in loads of other pies, too: producing an album for Radiohead’s drummer (Philip Selway), composing the score for Armando Iannucci’s In The Loop film, scoring a season for the RSC and also working with the likes of Bat For Lashes, Beth Orton, Foxes, Years And Years, Hot Chip, Sia, Explosions In The Sky, Underworld and the Manic Street Preachers, no less.

Tonight (Feb 26), in a special one-off Limbo event at the Bongo Club, Adem comes to town to promote his new album, Seconds Are Acorns, with support on the night coming from Glasgow’s Jo Mango and Edinburgh songstress Hailey Burns.

AAA caught up with Adem earlier this week to quiz him on some of his favourite things.

Gamera by Tortoise.  This 12″ (along with the 7″ Why We Fight by the same band) totally blew my mind when I was at school. The production, choice of sounds, and performances are all beautiful and transporting. I was making similar music at the time (in Fridge) and hearing these cuts was an affirmation and inspiration. I saw them play at a tiny club, Water Rats in London, which is a very close contender for my best gig, too

If it could be considered a single, Music for 18 Musicians by Steve Reich would probably pip this to the post.

I think it has to be Blue by Joni Mitchell. That is a tremendous album of beautiful sensitivity in the content and performances.  It has a wonderful continuity throughout and is rich and moving and inspiring and funny and deep. The simple sound belies a brilliant production on this album. The vocals are heavy with experience, but light and melodic. It makes me cry almost every time I hear it. 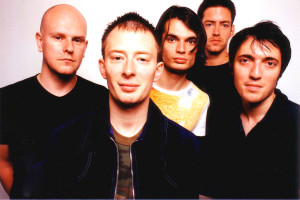 When I was at school in the 90s I went to lots of gigs. One time I went with my friend Kieran Hebden to Oxford to see this new band play. We paid 50p each to get in to the hall and was surprised to see lots of rigging and lights and cameras around. The band was Radiohead and they were recording the video in advance of the single Creep. It was a fantastic gig filled with exciting energy and awesome songs and sounds. I picked up their brand new Drill EP.

Joint favourite gig would be the HOMEFIRES festival I ran in London, but that’s a festival – but check out the dates of those line-ups; early UK performances from Joanna Newsom, Grizzly Bear, Bat For Lashes, Andrew Bird, Final Fantasy as well as established artists like Badly Drawn Boy, Bert Jansch, Beth Orton…

I love my Ted Hughes Collected Poems. It is filled with such harsh beauty and soft menace. I always return to it and feel desolate and inspired in equal measure.

This changes a lot. A current favourite is The Story Of The Weeping Camel, directed by Byambasuren Davaa Luigi Falorni. I watched it again recently with my five-year-old son and was filled with his sense differentness and wonder at how so many unfamiliar things can be happening all at the same time in this world. It is hypnotically paced and is absolutely entrancing. There is very little speaking in this film but the environment and the people in it tell such a rich story. Ask me next week and it might be James Cameron’s Aliens. Oh, and check out In the Loop (Armando Ianucci) and the forthcoming The Ones Below (David Farr) – I did the music for them.