Born in the Kingdom of Fife in 1960, Ian Rankin graduated from the University of Edinburgh in 1982, and then spent three years writing novels when he was supposed to be working towards a PhD in Scottish Literature.

It’s doubtful he’s any regrets, though, as these days he’s the most widely-read crime novelist in the UK, with worldwide sales of more than 30 million for his Inspector Rebus novels, and more awards than any mantelpiece can hold.

Probably The James Plays at the (2014) Edinburgh Festival. Stunning theatre at a time when history and political change were on everyone’s mind. 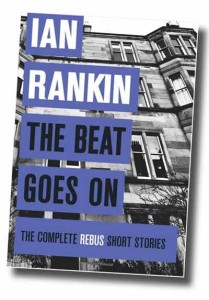 Lazy option would be the Oxford Bar, but I also have a lot of time for the Blue Blazer, the Bow Bar, Kay’s, Bennets…

I don’t do style bars, unless The Blackbird counts.

“A tardis of a

If I’m feeling flush, Ondine or Mark Greenaway. But a curry from Pataka does me most of the time.

I love and hate the Festival. The crowds and traffic can be wearisome, but the buzz makes up for it.

I’ve only been to Aizle once but loved it. And Nonna’s Kitchen in Morningside is a great neighbourhood Italian.

Ingleby Gallery is always worth a look.

Living in Merchiston I have lots of screens a short walk away. Dominion for comfort, Cameo for programming, Filmhouse for the bar.

Best acoustics are in Queen’s Hall, but I love the atmosphere at The Caves – great for emerging acts, blues and rock.

The Water of Leith from Dean Village to Stockbridge. Or the Hermitage of Braid for a bit more wilderness.

I love Leith Walk for its infinite variety, including a couple of record shops.

The New Town. Look at it on a map – it’s wonderful. Structurally elegant but full of surprises when you start to walk around it.

Devolution and the coming of the Parliament. What a change from the Edinburgh of the 70s and 80s.

Has to be the Book Festival in August. So many readers meeting so many writers. So many ideas sparking.

Bruce Findlay. I used to haunt his record shops as a kid. Met him for the first time about 15 years ago. He’s in his 70s now but still passionate about music and his city. Heart as big as Edinburgh.

A Tardis of a city you’ll never tire of exploring.