Tomorrow night (April 28), Edinburgh’s James Brown Is Annie will bring some funk back to the Capital with the launch of their new single, Get Up To Get Down, at the Hard Rock Café.

Ahead of their big night, Access All Areas caught up with frontman Aki Remally.

You’re launching your new single, Get Up To Get Down, at Edinburgh’s Hard Rock Café tomorrow night. Can you tell us a bit about the song itself?

Sure! When we were recording the album, it was one of the songs that seemed to change the most dramatically. It’s also one of the happier numbers that we play – it’s all about the groove for us! 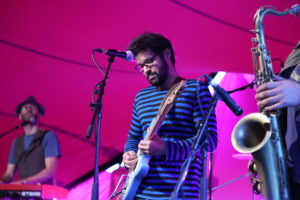 Why did you decide to have an official launch party for it here in Edinburgh?

We just want to keep live music and the music that we do in the public consciousness. Nowadays, I find that people can get a bit lazy about getting out and seeing what local bands are up to. Lazy is probably not the right word…really, it’s just us making a justified nuisance of ourselves!

You’re going to be performing at the launch – what do you have planned?

It’s going to be a bit of a teaser for our live shows – we’ll be playing six or seven songs.

How did it come to be produced by Molly Duncan?

We really wanted to take the band to the next level and thought that the best way was to do that would be by bagging the best producer for the job. A few other people were considered but Molly seemed to be the most logical choice – he’s got a great track record with funk music, has lots of experience and is a really nice person to work with, too.

The song has been selected as BBC Scotland’s Single of the Week. How did that feel?

It’ll bring us to the attention of a new audience which is a great thing. More people hearing our music is always a good thing.

You’ve had quite a year! How long have you all been playing together?

Last year you played a lot of festivals, including Belladrum Tartan Heart Festival. What have you got planned for this summer?

There’s been some talk about European gigs as that’s somewhere we’ve not really been able to play yet. We’d also love to play London again – last time we were there, we sold out the 606 Club and it was a great show.