They’re well above average – they’re not entirely white, either – and yet, remain one of the top soul-funk bands in the world. Yes, it’s Scottish funkateers, Average White Band, everybody. And they’re coming to the Festival Theatre this Sunday (July 24), as part of the Edinburgh Jazz & Blues Festival. Are you ready to get your groove on? Of course you are. 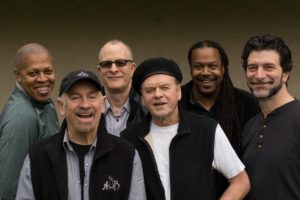 Best known for their million-selling instrumental track Pick Up The Pieces – a chart-topping hit in the US alongside its accompanying No.1 hit album, AWB (better-known as the ‘White’ album) – so influential are they, AWB are the 15th most sampled band in music history. Yet after 44 years getting people up on the good foot, they remain as popular and as relevant as ever.

AAA caught up with AWB’s Perth-born band-leader, Alan Gorrie, ahead of the group’s residency at the famous Ronnie Scott’s jazz club in London.

So, having lived in the United States for many years, will you be bringing the sunshine with you when AWB roll into town this weekend?

“Absolutely – and some tanning lotion.”

Your last show in the Capital was at the Queen’s Hall – surely gigging at the much larger capacity Festival Theatre is a sign people on this side of the Great Undrinkable are loving AWB more than ever? What can the audience expect apart from the funk, the whole funk, and nothing but the funk?

“Expect a sunnier set all round – perhaps a bit of ‘Soft & warm – quiet storm’ in there, too, as well as the funkaditional menu.”

AWB remains, quite rightly, a popular live draw. What are the ingredients to ensuring longevity and keeping fans – as well as new fans – coming back for more?

“Well, a songbook that stretches across quite a few R&B genres, and a constant retooling of arrangements – and setlists – from visit to visit.”

It’s a question you’ve been asked time and again. But looking back for a moment, how does a bunch of Scottish guys from Perth, Glasgow, and Dundee not only get so funky, but become so well respected by the black community from which the funk and soul genres are so closely identified with? As Sky Sports presenter Jim White once famously said to Brian Laudrup – why are you so good?

“Because we actually took it very seriously for a bunch of jokers, and were determined to hone our chops alongside the best America had to offer – hence our (somewhat penniless) move to The States back in ’74. Working then with Arif Mardin at Atlantic Studios was quite the finishing school.”

You’ve got two sax players back in the band. Since adding a new saxophonist, you all look happier, and more energised than ever. How do you keep things as fresh as the proverbial daisy in the band? You’ve also got current, established members, who’ve been in the group longer than some of the original members. Does the band feel like family to you?

“It is very much a family. We spend so much time in travel and onstage together, that it is a very democratic and nurturing environment. The new guy, Cliff Lyons, is a bit special, too – helluva’ player and the nicest guy on the planet.”

The word “funk” has re-entered the mainstream lexicon once again. With the likes of Daft Punk and Mark Ronson getting everyone up on the good foot in the digital age, why do you think the genre has discovered new-found popularity? Everything always comes full circle again – doesn’t it?

“Well, they had to embrace funk again, didn’t they……after trying everything else and coming up short.”

Which AWB Edinburgh gigs – from back in the day – do you remember most vividly?

“Playing our first gig in original AWB with Robbie McIntosh at the University refectory, and folks actually hanging off the balcony, going nuts. Then the first Playhouse gig – an early Regular Music promotion that coincided with L.G.R.A. (Let’s Go Round Again) being in the charts (1980). Another magic night. There have been lots of good ones, though.”

It’s a question fans often ask: will the classic, mid-70s-era AWB line-up ever get back together again for a one-off show?

“Not for any reason that I can think of, frankly.”

You’ve lived in the United States for a long time. Ever considered coming back to live in Scotland? And if so, where?

“Perhaps – Perth would be the obvious choice if I did.”

Will you continue to lay down the boogie and play that funky music ’til you die? What’s up next for AWB?

“Yes… and next is our final two tour dates both in the homeland – Perth on Saturday and Edinburgh Sunday.”