Dave Graney is one of rock’n’roll’s great scintillators. Over a career spanning nearly 40 years – almost all of that working with his wife Clare Moore – the maverick Australian musician has built up one of the most eclectic bodies of work in the business. A long-standing caporegime in what he calls the Melbourne music Mafia, Graney has channelled everyone from Charles Aznavour to Captain Beefheart and the manic messianism of the final days of Jim Morrison, all with the swagger and elan of a bohemian saloon entertainer in the wild west. One-dimensional he certainly is not.

Graney is returning to Edinburgh on April 8 to play the Voodoo Rooms with his latest outfit, Dave Graney & The MistLY, which features Moore on drums, longtime bassist Stu Thomas and Edinburgh-based guitarist Malcolm Ross (formerly of Josef K, Orange Juice, Buckley’s Chance and Dave Graney & The Coral Snakes, among many others).

The impetus for this year’s European tour (he also plays Glasgow on April 11) was an invitation from comedian Stewart Lee to perform at the All Tomorrow’s Parties festival Lee is curating in Wales. Also on the lineup are Roky Erickson of the legendary 60s psychedelic band The 13th Floor Elevators, the Sun Ra Arkestra, The Fall, Sleaford Mods, and many more. 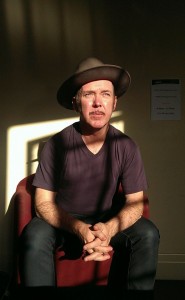 “Yeah, that was a real bolt out of the blue,” Graney says of the invitation. “It’s a real honour to be amongst this kind of roll-call of underworld freaks, y’know? We’re very excited by the idea. So we thought we’d do more shows organised with friends, very street-level type things, like with Malcolm up in Edinburgh.”

It turns out Lee has been a fan of Graney and Moore’s work for quite some time, dating back to their seminal 80s band The Moodists.

“We’ve met him in the past over the years. He came to see Clare and I when we played in The Moodists, when he was a teenager. I think we played at a university he was at, and he has kept abreast of our work. He’s been in touch with us, and we’ve been to see him perform in Melbourne at the comedy festival, and in London. We’re great admirers of his work, he’s amazing. And he wrote his first novel (The Perfect Fool, 2001), which was almost about Roky Erickson, or a character very much like him – so he has always been very musically minded, and he has written about our music in newspapers in the UK.”

Graney and Moore have decided to change tack from their usual approach to recording music – they are releasing one digital track a month in 2016. Graney assures us, however, that it’s not the end of him making LPs.

“We’re just kind of experimenting… we thought we would explore the digital world a bit, see if it’s free and easy and liberating not thinking of physical copies and doing things quite quickly. You could really put one up every day, I guess, if you wanted to,” he laughs. “It’s a bit confusing, people talk about it in the same way as the old world almost – release times and album tours. It should be a lot freer than that. We’re just trying to be as loose as we can.”

The first of the digital releases was I’m a Good Hater – a classic piece of Graney wordsmithery that would be a surefire single if it were on an album. “Yeah, I think it was a really good song,” Graney says. “We’ll probably put out some sort of physical collection eventually, but they’ll probably be different mixes or something. We’re still thinking of doing pretty different things. The next one is called This Is The Deadest That Place I’ve Ever Died In, it’s a very anarchic, post-punk one, and again it’s just me and Clare playing on it. I always think of being played on the radio and making songs three or four minutes, but this one’s much too rough for that sort of thing. After that we’re going put out a song called I’ve Been Trendy, which is almost like a JJ Cale-type thing. So we’ve got them pumping out.

“I mean, I like albums. Kim Salmon (The Scientists, Beasts of Bourbon) just released a really great album here in Australia, and he spent a lot of time on the artwork and the song running order and it’s got really great linking themes through it. I do like albums like that, actually. It’s a bit frustrating for me in the current world, people talking about vinyl releases all the time, but there are fewer record shops. It’s a funny mixture of 21st century and 19th century, because you have to go out like an old-school person and play to sell the artefacts if you make them.”

In concert, Graney is often flamboyant in his onstage personae – he is given to surreal monologues and adopting the mannerisms of controversial characters.

“I used to do a lot of talking at my gigs at first after The Moodists – who were a very powerful grunting group of brute force. I wanted to get away from that when I started to write my own songs. I wanted to play a variety of songs and feels, so I thought if you talked about other things in between you could create an atmosphere that these songs could then come into. That was what I used to do, and then I went through different periods of not talking, just holding up signs, and other times just talking too much. It depends on the situation.”

Graney is looking forward to returning to Edinburgh – the last time he and Moore played here was in 2008 – as he has spent quite a bit of time in the Capital in the past.

“We’ve been there a few times, and we’ve always been great friends with Malcolm Ross and (Ross’s wife and fellow musician) Syuzen Buckley, who live up there. We’ve met people through them – very warm, generous people, we find them to be in Scotland. They seem to be able to tune into our sense of humour. I do love walking around the place.”