Earlier this year Scots singer-songwriter Nina Nesbitt found herself in a shower with a bloke she hardly knew, a bouncing version of her song Chewing Gum playing in the background.

She was stripped down for the scene in her Chewing Gum video, but the music was dressed up in layers of synthesisers and a generous dollop of light ‘pop’.

Gone was her thoughtful ‘girl with a guitar’ image. In was a highly polished Nina Nesbitt, long hair cropped to a sleeked back bob, body-con outfit, lots of coy glances to the camera. 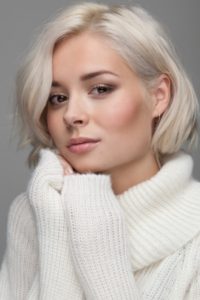 Her reinvention was dramatic but largely well received – that video, after all, has so far managed a very respectable 3.2m YouTube views. With a big record company behind her and reviews praising her new pop sound, the stage looked set for the next chapter in the Edinburgh-born artist’s personal success story.

Last thing anyone might have expected was a massive Nina Nesbitt shaped u-turn.

“I did a tour when Chewing Gum came out,” recalls Nina. “I can say now that I felt so uncomfortable on stage.

“It all felt so wrong, everything about it was wrong. I needed to go right back to the drawing board.”

Many other 22 year old artists striving for a break – any X Factor wannabe, for example – might have put their head down and stuck with it. A record deal with its marketing power and connections is the glittering prize they all seek, after all.

But with a maturity beyond her years, Nina quit her label Universal Island, snatched back her career and walked away.

She fired a quick shot through her social media channels she went: “For the past couple years I’ve felt a lot pressure to have a hit, to sound like other people, to keep it safe, become someone I’m not comfortable being,” she wrote.

“Of course I’m ambitious, but I want to have success as ME, not someone I feel pressured into being.

“Sometimes people forget the ‘product’ they are working with is actually a human being.”

She cited pressure to look a certain way, date certain people, be with the right crowd or pander to the press – none of it matching her vision of the artist she wanted to be.

“I had written an album which was going to be electronic pop,” says Nina, who has just launched her first new material since the record company split, an EP called Life in Colour.

“But I didn’t want to be singing shiny pop songs or doing big budget videos.

“I took the songs and handed them to a publisher to send out. Other artists have picked them up, which is amazing – it means I have the best of both worlds.”

Probably best known for penning her own material – Stay Out, Apple Tree, her number 1 Scottish chart album Peroxide among the better known – she’s now carving a fresh niche as a writer for other artists.

The Shires put three songs which she had a hand in writing on their new album My Universe. Released at the end of last month it stormed the charts, landed at number three and instantly became the fastest-selling UK Country album of all time.

Across the Atlantic, Disney XD Kickin’ It starlet Olivia Holt picked Phoenix – written by Nina along with award winning songwriters Steve Mac and Ammar Malik – for her debut single.

While writing for others is definitely now part of her CV – along with her role as beauty ambassador for W7 cosmetics – her fans haven’t been forgotten. In fact it’s her fans who have provided the foundation for her latest EP, a collection of five songs inspired by the real life stories they’ve shared with her over her social media channels.

“When you’re writing about your life every day, it’s draining,” explains Nina. “So I asked online for anyone with a story to tell that I could turn into a song, then got lots of stories… thousands in fact.

“They were really varied, some were very emotional, some very dark, some were a nice read.

“Whenever something jumped out, I tried to write a song about it. It might have been a little story or just someone writing about their feelings.”

Their stories formed her Song I Wrote for You project, and they touched a nerve. “So many young girls wrote to me with anxiety, depression, self-harm,” explains Nina, who’s originally from Balerno in Edinburgh and is now London based.

“I struggled with anxiety when I was around 15 or 16 years old, I recognised what they were saying. I know how it feels to be in that position where you feel that way, but I didn’t realise so many people had it.”

The songs are named after cities connected to the fans. Manchester is a thoughtful exploration of angst and self harm, Brisbane is based on a heartbreaking message from a fan describing the loss of her father. Another, Ontario, reflects on a deteriorating relationship.

She recorded it at her own Niightwatch Studio and sent it out into the world via her new record label, N2Records, for download on iTunes and Amazon.

Not forgetting her fans, she set up a social media group where they could meet to chat through relationships, anxieties and stresses, offering her own ‘agony aunt’ input.

Meanwhile, she’s putting the last touches to a new album which will be released next year – a return to the Nina Nesbitt style that almost disappeared in that haze of synthesised pop and glossy video.

The sound, she promises will be all her own. “Stripped back not folky or acoustic.

Nina Nesbitt’s EP Life in Colour is available to download on iTunes and Amazon. https://ninanesbitt.mysupadupa.com/

Picture supplied by W7 cosmetics for which Nina is brand ambassador