Love it or loathe it, there’s no getting away from folk music these days.

Whether you’re someone who likes Phil Cunningham and Aly Bain, The Treacherous Orchestra, or Mumford & Sons – the traditional, the contemporary, and the nu-folk indie styles can be found on the biggest stages and in the back rooms of the smallest pubs.

And unlike the stereotype, you’ll find no Aran sweaters or fingers-in-the-ear, either. Face it: folk is in. Then again, has it ever gone away?

Two well-known folkies worth asking the question – Leith-based Devonshire guitarist Tom Oakes and Shetland fiddler, Ross Couper – host a series of workshops and sessions, as well as a gala concert this weekend.

Their aim: to boldly go where no folk duo has gone before… That is, to take intermediate/ advanced adult musicians from workshops at the Out Of The Blue Drill Hall, to a couple of sessions at a Leith pub, then onto The Pleasance Cabaret Bar (open to the public) where some of the finest folk artists around will be showcasing.

Both Oakes and Couper are no strangers to playing big festivals in front of large audiences. Neither are they rookies when it comes to taking their music to all corners of the globe. Having played together for eight years, the formidable, dynamic duo are an in-demand act. 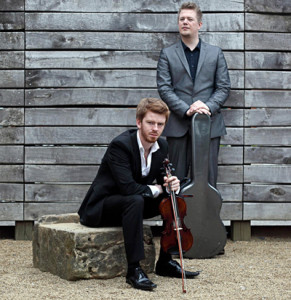 So, for the curious looking in – whether they’re an interested musician or someone who is simply interested in listening to the music – can Tom Oakes give a taster of what to expect?

“Well, from the workshops, it’ll be fairly intensive teaching on fiddle and specifically DADGAD-tuned guitar. We want to show our styles and approach. Not because they’re any better than anybody else’s, but just to add to the pot, as it were. I’d like to think we know how to entertain, and we’re very much interested in showing others how we do that. We’ll cover everything from traditional, to modern styles and tunes, to improvisation and arrangement. In regards to the big concert on Saturday, we’ll be giving the very first airing of material from our forthcoming album, as well as presenting two duos made up of very close friends of ours (Kathryn Nicoll & Thalia Blacking, and Laura Grime & Jenn Austin). They’re all outstanding musicians covering a myriad of different styles. It should be a really great night.”

Tell us a little bit about Ross (Couper) and yourself, then. What do you both bring to a project like the one you’re orchestrating this weekend?

“Ross is from Shetland and has been playing since he was a toddler. He’s very much rooted in Shetland music but has branched off countless times. He has thousands and thousands of tunes – from bluegrass and Scandinavian to the more obvious Scottish and Irish – and is never afraid to play anything with less than a hundred percent conviction. He has the exact same attitude to teaching.”

“I’m a guitarist for this weekend, but also a flute/ whistle player, and have just released a solo flute album on my own label, Comfort Food. I made a conscious decision a number of years ago to concentrate on DADGAD guitar, and have done several short courses on it with the Scots Music Group. Students had asked if they could do more, and this weekend is the result.”

Some people might think teaching can be a bit boring and rigid. How do the likes of workshops make learning more fun and interactive for participants?

“Between Ross and myself, we’ve been participants – and later taught – at what must be hundreds of workshops between us. Good ones and bad ones, but the best have been amazing. I think it’s the sense of being around people who are on the same page and ideally at about the same level. You can help each other, as well as just relying on the teacher. It’s pretty tough from a teaching point of view – to keep energy and concentration up – but I’d like to think we both know how to make them fun and interesting.”

There’s a huge social element to folk music. Will there be an opportunity for people to hang out with the musicians?

“Absolutely. That is actually our main aim of the weekend, and we plan do do as much with the participants as possible. Sessions, food, a few pints. And, of course, all of the teaching, learning, and general craic that goes with it. I’m looking forward to making a few new friends in the process.”

Folk music is an integral part of Scottish culture – why do you think it’s become more and more popular in recent years?

“Has it ever not been popular here? I think my main reason for moving to Scotland was that folk music seems to bubble so close to the surface. I love how all the various music scenes in Edinburgh seem to hang out and collaborate together. People seem to care way more about good music here than any particular need to stick to a genre. I love that.”

Speaking of Edinburgh, how does the Capital compare to other Scottish towns and cities where Folk music is concerned?

“It’s different I suppose, in, that, it’s a total melting pot, musically. We’ve not quite got the numbers of musicians that Glasgow has, but those that are here are simply outstanding. Places like The Jazz Bar serve as amazing creative hubs. I mean, where else will you see DJs, members of the SSO (Scottish Symphony Orchestra), world class traditional, jazz and funk musicians, animators, etc., all socialising together under one roof? Leith especially, is fast becoming more of a creative hub. I open my window in the summer and there’s a jazz band practicing in a nearby flat, an Indian procession going down the street. It’s special and I hope those coming to visit us for the weekend will see and hear some of that.”

Speaking of something for the weekend, check out this BBC Alba clip of Ross and Tom: www.youtube.com/watch?v=wq-b8CFh2ds