Formed in 2006, Edinburgh’s The Valkarys are a garage/psyche outfit led by Scott Dunlop. The band announced itself with the release of their excellent single, Candy Girl, which earned them airplay on radio stations across the UK. After moving to London, the Valks released their self-titled debut LP, The Average Can Blind You To The Excellent. The album was well received by fans and critics alike, and tracks from the release were played by The Libertines’ Carl Barat at his club nights in London. Firmly on the radar now, the band were soon invited to play live at some high-profile events, including music mogul Alan McGee’s legendary Death Disco night in Notting Hill, and the notorious Babyshambles club night in Camden. Returning from the Big Smoke to their native Auld Reekie recently, the band released their long-awaited second album, (Just Like) Flying With God, which has earned them yet more praise. Tomorrow (Sept 5), The Valkarys can be seen in live action when they take to the stage at The Mash House in Edinburgh. Earlier this week, AAA caught up with bass player Colin Brennan for a chat.

It’s been five years since your debut – why the long wait for the follow-up?

“It’s not like we’ve been unproductive during that time. The band toured the first album, relocated to London, and released two EPs – Chlorophorm in 2012, and Psychodelica in 2013. I guess five years is a long wait for album number two, but I think it was for the best. We’d amassed a good bunch of songs to chose from and had a solid line-up. I think that helps a lot.”

How has the band changed from the first album to now?

“The band’s changed dramatically over the years. There’s been a lot of line-up changes, and other ups-and-downs. One thing that has remained a constant is [our frontman] Scott’s vision and passion for the band. He knows exactly the direction he wants the band to move in.”

Have your influences changed down the years?

“I think as you get older and grow as a person your influences are always changing. The longer you’re here, the more you experience, and that’s bound to have an affect on you. As a band we draw influences from all walks of life – music, fashion, politics… some of us even train simulators. But we’re lucky that despite some differences, we share a lot of common ground in these areas…. maybe not the train thing though.”

What’s been the high-point for the band since forming?

“There’s been so many high-points over the years, from the very beginning when I wasn’t involved right up till now. Playing Alan McGee’s Death Disco, the Babyshambles club nights… the list goes on. I can’t speak for the others, but for me, I would say finishing the second album and getting the hard copies in our hands. We all worked hard for that, and I think the outcome is something to be really proud of.”

“Haha. I’m sure there are many of them, but most of them are probably unprintable. But seriously, for me, there’s not really been anything that’s affected me enough to mention. It’s all sunshine and rainbows in the Valks.” 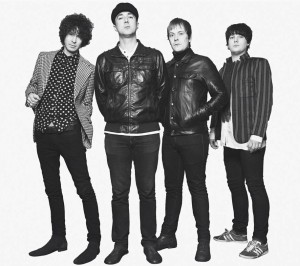 Tell us a bit about your gig in Edinburgh, why is this an important one for you?

“Gigs in Edinburgh are always important to us. It’s our home city. We don’t play here very often. Maybe four times a year. So we want to make sure the shows we do play here are memorable and worth attending – which of course they always are. We’ve not played a gig in a while now, and we’ve recently taken a few weeks off from the studio to keep us fresh. But Scott’s been constantly writing, and we’ve been practicing hard since we went back. We’re going to be playing songs no one has heard yet at this gig, along with the old classics. It’s gonna be nice sharing the stage with our old mates Caravan Club, and meeting the Ayakara lads too. I don’t think any of us have had the pleasure yet. It’s a great line-up, and definitely not to be missed.”

The music scene in Edinburgh is in rude health now after years in Glasgow’s shadow – what’s changed?

“I don’t think anythings changed in terms of musical quality. There’s always been great bands from the city. Maybe people are taking a bit more notice now – and that’s great. I still feel more needs to be done to make the band scene better; in terms of venues and promoters giving acts a fair deal, or more bands just getting out there and doing it themselves, like we do 99% of the time.”

Are there any other Edinburgh bands out there who are exciting you at the moment?

“I really like Miracle Glass Company, The Black Diamond Express and The Dark Jokes. All worth checking out and, if you haven’t seen Frantic Chant, The Merrylees or The Jackals yet you’re seriously missing out.”

If you could pick a support slot with any band, who would you chose to open for?

“I’d probably want to open for Dylan and the band 65-67, or the Beatles would’ve been nice. But nowadays, I think we’d all quite like to open for the Brian Jonestown Massacre.”

What can anyone heading along who has never seen you live expect from your show?

“Er, there’s probably gonna be a bottle of Buckfast or two on stage. I’m getting a new hairdo especially. If that doesn’t have them stampeding to the venue, then I dunno what will. Seriously though, we’ll be playing material that no one’s heard before, and it’s sounding mega. And Kier’s prone to a wee onstage boogie these days, which is quite exciting.” 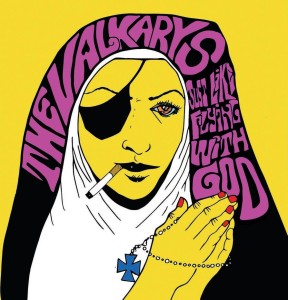 The band moved to London and then back to Edinburgh – why did you decide to come home?

You’ve had some great praise over the years from the likes of Carl Barat – how helpful has this been in raising the band’s profile?

“It’s always helpful when anyone speaks positively about the band, and we really appreciate all the nice things people have said about us. Over the years, we’ve had some great folk backing us. Clint Boon regularly tweets about his love for our music, Fred Perry Subculture had some really positive things to say about us and, obviously, Carl Barat getting behind us is a massive compliment. But people should really be getting out there, discovering and supporting all independent music for the love of music. Not just waiting till they’re told who the next cool band is and then jumping on the bandwagon, for want of a better word.”

The band provided the soundtrack on the video for the launch of the new Hibs kit – this must have been an honour?

“Have you seen the video? It’s good, and our song storyteller fits really well. After it was released, I was standing in the studio, the door opens, and Skeets comes floating in on some cloud air or something and said, “Well, I wish you all well in your future musical endeavours, but that’s it for me. I’m retired.” He’ll not be that happy again till he completes his collection of Clarks desert boots… I’ll let you into a secret though… I’m a Jambo.”