Tony Black was born in Australia and grew up in Scotland and Ireland.

A former Edinburgh resident now living on the Isle of Arran, he is an award-winning journalist, editor, and novelist. His journalism has appeared in the UK national press and his short fiction in a variety of publications.

Tony is the author of the novels Paying For It, Gutted, Loss, Long Time Dead, Truth Lies Bleeding, Murder Mile, The Storm Without, His Father’s Son,  The Inglorious Dead, The Last Tiger and Artefacts of the Dead, among others.

His latest novel, Summoning The Dead, is out now. Read a description below, then check out our exclusive interview with Tony… 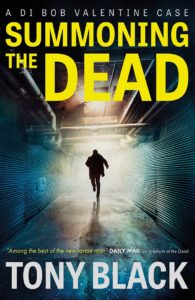 A young child lies mummified in a barrel. His hands, cable-tied, appear to be locked in prayer. As forensic officers remove the boy they are in for an even bigger shock – he is not alone.

With his near-fatal stabbing almost a memory, DI Bob Valentine is settling back into life on the force but he knows nothing will ever be the same. Haunted by unearthly visions that appear like waking dreams, he soon understands he is being inducted into one of Scotland’s darkest secrets.

When the boy in the barrel is identified as a missing child from the 1980s, it re-opens a cold case that was previously thought unsolvable. When further remains are unearthed, the facts point to a paedophile ring and a political conspiracy that leads all the way to the most hallowed corridors of power.

When did you know you were going to be a writer?

Very early. I’d say after about a year of journalism I knew I couldn’t stick this for the rest of my days.

What books are on your bedside table just now?

A Bill Hicks biography – he’s a legend – and a Joe R. Lansdale novel, Cold in July.

Do you have a writing routine? And has it changed since you became a father?

I can’t say I really have, though if I did have anything like it then it has gone out of the window since my son arrived a few years ago. I tend to write when I can fit it in, or when I absolutely have to like the week before deadline.

What’s the best piece of advice another writer gave you?

McIlvanney told me travel always gives you material and Ken Bruen told me to get through the promotional stuff by rewarding yourself with a nice cold pint after every event.

Who are your literary influences?

What novel do you wish you’d written?

The Da Vinci Code, purely for the knackers it raked in. There’s no money in writing.

What Tony Black novel are you most proud of?

I liked Loss, and Irvine Welsh said some very nice things about it, which was nice but probably The Last Tiger.

Tell us one piece of advice you give aspiring novelists?

Ask yourself why you want to write.

There’s some real low-life types in your new book, and most of them are politicians — was that art imitating life?

Quite possibly. I do think politicians these days occupy somewhere between serial killer and car salesman in the popularity stakes.

The abuse of children in a care home features in the book, did recent events influence you?

Yes. Operation Yewtree and the Westminster scandal both sickened me so much I wanted to do something about it.

Was there one particular case which prompted you to write the story?

The Kincora boys home scandal in Northern Ireland, where boys were shipped to London’s Dolphin Square to be abused by, among others, Westminster elites, was a particularly disgusting and harrowing episode.

Did you have your doubts about tackling such a harrowing issue?

Yes, I didn’t want the story to be thought of as sensational in any way. I wanted to give the victims a voice and, at least in my story, find justice for them.

It must be a relief to see the reviewers acknowledging how sensitively you treated the subject?

A huge relief. Almost to a one the reviewers have commented on how they were moved by the plight of the boys’ story.

You’re a father yourself, did the research worry you?

Not so much worry, more sicken and perhaps upset a little. I felt for the victims and I felt for the boys in my story. My three-year-old was hugged a little tighter every night when I was writing the book.

This is the third outing for DI Valentine, does it get harder to write a series character or easier?

I think perhaps both. It’s easier in a sense because the characters are all developed and the setting is established but it gets harder to make the story believable in the context of previous stories.

I believe your next novel doesn’t feature Valentine?

Bay of Martyrs is coming out in March next year and it’s a crime novel but set in Australia. I’ve co-authored this with a fabulous Aussie writer called Matt Neal and we’re both very excited about it.

You’ve set two previous novels in Australia — His Father’s Son and also The Last Tiger — you have some history with the Lucky Country?

I was born there, but left very young. I’ve been back to live in Oz a couple of times and it’s a great place to be. I may very well go back again soon, I’m feeling the pull.