Clay Moloney, a cynical reporter with a regional Australian newspaper, is expecting an easy Sunday at work when the body of a young woman washes up at the Bay of Martyrs. The death is an inconvenience for Clay, who’s content filing obituaries and re-writing government press releases on the new multi-million-dollar airport. But the more he digs into the Bay of Martyrs incident, the more he realises the girl’s death is not a case of misadventure, despite what the police tell him. Clay becomes obsessed with the murder investigation, putting himself and his co-worker Bec, an Irish-born photographer, in danger. Will Clay achieve justice for the young student, or will those in power stop him before he uncovers the truth?

AAA invited Tony and Neal to discuss the creative process behind what’s one of the year’s best crime novels.

Tony: So, how does it feel to have turned your home town into the murder capital of Australia – gettin’ funny looks on the street?

Matt: It hasn’t been released here yet so it’s still a bit of a dirty secret. But the locals who have ordered copies online tell me they love seeing good old Warrnambool as the backdrop to a crime novel. Makes them look at the place through fresh eyes, so they say. What was it like for you? Most of your crime books are set in Scotland, so what was it like running your mind through the Aussie streets of your halcyon days? 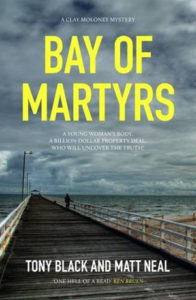 Tony: Yeah, right now it’s making me nostalgic for some decent weather, the barbie and Crown Lager. Crime fiction seems to fit the Scottish setting as snugly as OJ’s glove but I don’t think you Aussies realise you actually do live in paradise. I’ve read a fair bit of Aussie crime – I’m a big Peter Temple fan – and I think part of the reason it does work so well is attached to the idea that when bad things go down in such nice places there’s a disconnect. In fiction this hits like a sucker punch, in Bay of Martyrs for example we open with a dead girl’s body found under travel brochure blue skies: the two create a ready-made tension. Temple’s from Ballarat, not too far out of your manor, the tourism chiefs will be well chuffed with that, eh?

Matt: Crown Lager is horrible – you may as well be drinking Fosters, which no self-respecting Aussie drinks. But you’re right about the rest of it. Nothing quite ruins a day at the beach like a corpse. Hopefully it doesn’t affect the tourism. But I like how we kept the settings true to reality. The idea someone could pick up the book and then visit the places in it – places in and around my hometown – gives me a bit of a thrill. See the scenic carpark where someone gets murdered! Visit the riverside restaurant where the dead girl used to work! Tour lovely Port Fairy, home to the climactic shoot-out! Gosh, I must have been annoying to work with … how was it going from lone wolf to co-author?

Tony: Oh, man, you’ve made me feel like an ersatz Aussie. Or worse, a pom! Crown was the beer everyone drank 15 years ago. I was on the VB, which I believe stands for very brutal, going by my hangovers. But, yeah, a murder trail in Warrnambool – like the Holywood slebs’ houses one – is an awesome idea. I think you should pitch that to the city fathers. To answer your question, writing is a pretty lonely occupation at the best of times, you’re locked in your garret with nothing but a word count for company. It’s nice to have someone to bounce ideas off, to tell you something isn’t working or needs work etc. You can get this from an editor, of course, but it’s after the event and invariably involves rewriting what you’ve already marked as finished. This process felt like nostalgia for my newspaper career, which was fun once but I eventually grew to loath. You still work in newspapers, though, does Clay Moloney’s experience chime with your current view of the business?

Matt: I went on one of those Jack The Ripper tours in London after reading Alan Moore’s From Hell. It was rad. I will definitely bring the idea up at the next council meeting. Yeah, newspapers aren’t what they used to be when we worked together. It’s a weird time to be a journalist. But I will say my journalistic experience proved invaluable in writing Bay of Martyrs. Whatever situation Clay was put into, I would try to think like a journalist. How would I write the next story? Where would I get the next piece of information from? I hope it made the plot flow in a natural and realistic way. But it was also fun to throw him into the firing line and have him get beaten up a lot! You’ve done the journo hero before with yer old mate Gus Dury – how do Gus and Clay differ? Do you reckon they’d get along and be able to have a beer or twenty together?

Tony: Clay’s a bit more together than Gus, but just a bit. They’re both hacks which I like because I don’t buy into the ex-SAS and almost a superhero type of protagonist. I get that they need some sort of background that qualifies them for the detective work – I deffo don’t buy the Mrs Marple type either – but as close to a realistic dude on the street works best for me. I always try and work in a female counterbalance to the male lead, too, because otherwise things can spiral out of control with too much testosterone flying around. Debs, in the Dury novels, is a good example of Gus’s voice of reason and in Martyrs we have Bec. You did the first draft, did you find, after all your journalism, it was a completely different ball game bringing characters to life in fiction?

Matt: Yeah, it was pretty different. But I pride myself on having a crack at any kind of writing – the trick is learning the rules for the style you’re writing and you were very helpful with that before we got going. In the end, everything I’ve written before, whether it be articles, scripts, reviews, songs, radio plays or whatever, it was all helpful. So as much as it was a different and new experience, it was also the composite of a lot of things I’d learnt before. The hard part, I imagine, is keeping things fresh for yourself. You’ve got 13 books under your belt now, so how do you keep it interesting?

Tony: I think 14, or is it 15? Who’s counting. Yeah, if you’re writing the same thing over and over again it will get boring, that’s what killed newspaper reporting for me. I tend to approach novel writing from the research, if it’s an area of interest that I haven’t looked into before then that’s the way in for me. I use the novel writing as a way to flesh out my knowledge. Martyrs was a challenge too, I hadn’t set a crime novel in Oz before so that was something to aim at. And now we have another to work at with book two in the series’ delivery date looming. If we keep this up we could have the entire state of Victoria littered with bodies.