Back in 2002, a relatively unheralded US comic made his debut at the Edinburgh Fringe, playing the cramped but convivial basement room at The Tron in Hunter Square. Apparently, this guy Doug Stanhope was utterly uncompromising and uncannily uproarious, and he dared to go where other comedians feared to tread – all of which turned out to be abundantly true. That celebrated first Fringe appearance was the beginning of Stanhope’s career outside the US, and on October 1 he is returning to play a one-off warm-up show in the same sweaty room at The Tron before embarking on a UK and European tour.

“I have a lot of memories of The Tron,” Stanhope says, talking to AAA from his home in Bisbee, Arizona. “I remember the sickest I’ve ever been was during a Fringe when I was staying right across the street from The Tron, and I was just fevered and pouring sweat and cold shakes, and I still had to do the show. They just brought me out like that scene from Pink Floyd: The Wall where they’re carrying him from his near-overdose onto the stage and he’s melting. I remember just trying to stay upright and not faint, just say the words and get back into a sweaty bed.

“That was the same place where another time I was doing one of those late-night shows, and I was just hosting. I was doing a bit about ecstasy, and some girl started screaming ‘That’s not funny! My sister died from ecstasy!’ And I was just railing on her, saying ‘No-one dies from ecstasy, you die from shit that was sold to you as ecstasy that wasn’t. And your sister should have known to drink more water if she’s going to dance all night like an asshole’. And then she runs out of the room crying and I go ‘Ladies and gentlemen, your next act’ – because that’s the kind of host I am, get ’em all ready for a good show like that and then bring up the next guy. The next guy was Scott Capurro, who is a flamingly gay American comic – very funny. So I go to my usual spot, which is out back smoking, and Scott Capurro’s on stage, and evidently the girl had gone upstairs and told her brothers: ‘The American comic downstairs is making fun of our dead sister!’ So these two fucking knot-headed hooligans come down and get on the stage, thinking that it’s Scott Capurro she was talking about – because he’s also American – and they were going to kick the shit out of him. There were no bouncers and the ladies that were running the venue had to get those guys out of there. And I was out back, and someone ran out and said ‘You’ve got to go, we’ve got to get you to another bar’.”

Stanhope isn’t one to back down in his material, whether it confronts the audience or enrages elements of society. But he tends to avoid the obvious headline issues – not for him cheap shots at Donald Trump or David Cameron’s alleged porcine indiscretion.

“That kind of falls into ‘already funny’, like people who do News of The Weird jokes. ‘Hey, a guy got his dick stuck in a vacuum cleaner and it cut it off, did you see that story?’ Well, it’s already funny. What are you going to add to that? I have nothing, and it’s also one of those ones where you know EVERY comedian is grabbing a notebook. So unless I had something completely brilliant in some mushroom trip, some angle that I knew no-one else had, nah, I’m not going to waste my time. I’ll still read the stories though. 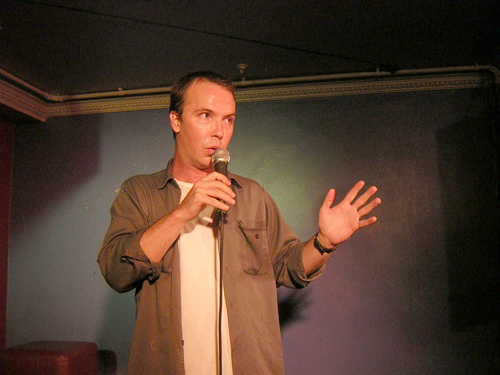 “When something’s inherently funny like Donald Trump or David Cameron, there’s no need for you as a comedian. You look on Twitter, and regular Joe Lunchbuckets have already come up with those jokes. It’s far more challenging to find something that’s not necessarily funny at all.”

Stanhope has certainly done that – during that first Fringe run in 2002 he eviscerated the unquestioning hero culture that surrounded first responders in the US following September 11, 2001, and he has consistently skewered and seared sacred cows ever since. I mention to him that the demise of Diana, Princess of Wales in 1997 was untimely in that it occurred the day after that year’s Fringe had concluded. A week earlier, and it would have been interesting to see how many comics would have been prepared to break the “too-soon” barrier.

“Wow, that would have been great. See, those are the stories where I run for a notebook – stuff that you know no-one’s going to want to touch. I had great Princess Di material, but I only did it for about a month. But I remember being all over that. I remember where I was when she died, but I also remember where I was the day after – I was at the Laugh Factory in Los Angeles, and I couldn’t wait to get on stage. It went down fairly well, but it would have been more fun over there in the UK – probably scarier, though. I don’t remember all of the bit, but I do remember ‘Paparazzi giveth, and paparazzi taketh away. Without them, who would give a fuck who she is?'”

hope’s many successes at the Fringe – he was a regular performer from 2002 to 2006 – he has no desire to play Edinburgh during the annual insanity again.

“Never again… The same as I wouldn’t do Burning Man or Mardi Gras again, it’s too much of a cluster fuck. Aside from the fact that it’s completely abusive and ripping off of the artists, the fact that comedians can go there and lose money while selling tickets… Aside from that, even if it was a good business proposition, I’m too old for that many people in that tight a space.”

Stanhope has remained committed to relentless live touring, eschewing the sort of TV opportunities that have seen so many of his peers become household names.
“The few things I’ve done, some of them were fun, but it’s nothing I seek out. Occasionally the phone rings to do something weird, but it’s usually quick and painless. I wouldn’t want to do a series or anything.”

He has made occasional appearances on UK TV, most notably at the behest of broadcaster Charlie Brooker, introducing himself with the line “I’m Doug Stanhope, and that’s why I drink”.”I remember taking one meeting during the Fringe where I was just, ‘I’m not getting up, if they want to meet with me they can come here’, and I just stayed in bed in my flat,” he says of his initial contact with Brooker’s producers. “But yeah, I did a Charlie Brooker’s Screenwipe where I showed up and I really had no idea what I was doing, so I just stumbled through it and they edited some kind of Frankenstein piece out of it. So it was Newswipe and then Weekly Wipe. Those I have fun doing because they come over here to the US to film, to my town, and they know how much I stutter and stammer through everything and they know they can fix it in post-editing. I think we’re doing another one while we’re over there in the UK.”

Stanhope has been domiciled in Bisbee, Arizona for most of this century, a small town of mostly oddballs, no-hopers and frontier dropouts where he feels right at home. People in Bisbee know he’s a comedian, but they don’t care to know the particulars. He seems settled and describes his life as that of a “country bumpkin”, a change of pace from his early career’s seemingly bottomless pit of graphic road stories about encounters with bottom-dwelling hookers, dwarfs and drug dealers. 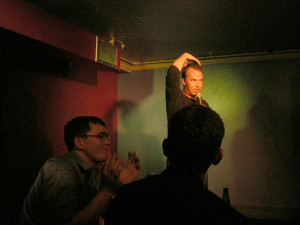 “Yeah, for a while I felt really bad about that. I forced myself to go out on the road and try to get into more trouble than I was really in the mood for, just because I needed stories, but I have all those stories already.”

Recently, his touring schedule has been less hectic than usual. Stanhope has just completed a memoir about life with his late mother, who he has described as an “attention-seeker, hoarder, avid alcoholic turned AA addict, truckstop waitress, truck driver and aspiring regional theatre actress”. It’s a very personal work – Stanhope assisted his terminally ill mother’s suicide, later relating the events on stage after the statute of limitations on his “crime” had expired, delving deep to present something so profound in front of an audience in a way they could take something from it. The book will probably appeal to many people who aren’t familiar with his dark, devastating comedy.”No, they want to sell it to women, I’m sure of it. They really want ‘mother’ to be in the title – ‘I get it, you want to sell it to chicks’. So yeah, hopefully it gets a new audience. I’m not worried about who’s buying it, or how many they buy – that’s for the book company to worry about. I’m just worried about it not sucking.

“It was a completely different animal to writing comedy. So much of it was having to go back through old shit and remember how stuff goes… It all has to follow a storyline. And my retention is so shitty that by the time I’m at chapter 14, I don’t remember ‘Did I say this in chapter three?’ When I go onstage, I know what I started with. Even shitfaced, you do an hour or an hour and 15 minutes, you know what you said. But writing 100,000 words, you go ‘Fuck, did I already use this phrase?’ And I don’t remember where to go back to to check. It was really hair-pulling.”
During the writing process, Stanhope had to resist the temptation to delve into the trove of his hooker and dwarf tales. However, it turns out there’s enough of those that another book may eventually appear that appeals more to his large but generally depraved following.
“And that would be so much easier to write. I might write that one even without a publishing deal. Writing this one, I started going ‘This story reminds me of that story’, but I didn’t want to just jam my mother in as some forced through-line just to talk about myself. There’s plenty of that anyway, but it made me realise how much more there is to write that would be more of what my fans want, or people in general want – the dirt!”
Doug Stanhope plays The Tron in Edinburgh on October 1 (sold out), and the O2 Academy in Glasgow on October 2&3. For full tour dates and tickets see: www.dougstanhope.com/tour-dates/
Stanhope’s as yet untitled book will be released by Da Capo Press next year www.dacapopress.com/