You might not be familiar with his name, but there’s a good chance you’ve heard some of Jace Everett’s music.
Certainly, if you’ve ever tuned into HBO’s sexy, supernatural series True Blood you will have – his track, Bad Things, is the theme-song. He also co-wrote Josh Turner’s No.1 single, Your Man.
As it happens, the Indiana-born, Nashville-based singer-songwriter is a lot better known on the other side of the pond, and he has five albums under his belt already.
The most recent of those was the excellent Terra Rosa from last year, which is described as a ‘raucous, revelatory song cycle exploring tales and themes from the Old and New Testaments’. 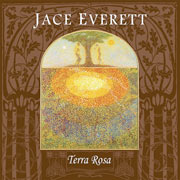 “Truth is, all of these songs are about me, trying to figure out what I believe and don’t believe,” says the 43-year-old, who can be seen in live action at La Belle Angele on Monday, 20 July. “It’s me going back to my closet and pulling all the skeletons out, looking at the bones and seeing what’s there.”
Though he’s often called a country singer, Everett is not so keen to be pigeonholed. “I don’t really feel like I have a responsibility to a genre,” he says. “What is really important to me is my responsibility to my writing and my performing, not dependent on some pre-ordained genre that I have to sit in for marketing reasons or whatever.
“Country is part of who I am, just like rock’n’roll is, just like pop is. It’s all just part of who I am.”
On its release last year, Terra Rosa earned Everett some of the best reviews of his career, and he describes it as his most personal and definitive work to date.
“When you’re making records, the more you they are the better chance you have, because no one needs another version of somebody that’s already doing it,” he says. “You need to do something that’s uniquely you.
“I feel l’ve achieved that more on this record than any other so far.”

Like, lady?(laughing)… I don’t know, I’m an album guy. I have to say, Too Sick To Pray by Alabama 3 was pretty epic.

Too hard! I guess, if pushed, based on the number of times listened, Abattoir Blues/Lyre of Orpheus by Nick Cave & The Bad Seeds.

Being a dad (laughing again). But musically, Oran Mor in Glasgow.

Letters From The Earth by Mark Twain. About 200 years ahead of his time. We’ll catch up eventually.