Jessie J has been ridiculed on social media after claiming that she’s ‘one of the greatest singers’ around today.

The 27-year-old Londoner said she’s annoyed her music isn’t celebrated in the UK as much as in the US, which prompted dozens to take to Twitter to denounce the singer.

One Twitter user wrote: “Which one of y’all told Jessie J she was one of the greatest singers in America?

Another tweeted: “Jessie J isn’t even the greatest singer in her own house.”

“Jessie J has a GREAT voice. Her runs are magic …. BUT … Saying she’s celebrated as one of the greatest singers in America is a reach,” another added.

One unimpressed music fan wrote: “Jessie J is a has been she tended to her own UK career demise by going back on everything she “stood” for and being a rude b***h.”

“I’m kind of a big deal in America” who does Jessie j think she is Ron burgundy!” another posted on the social media site. 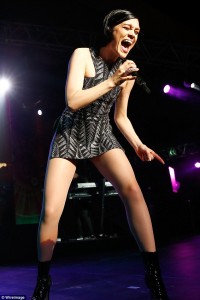 In an interview with Women’s Health Magazine, Jessie J said, “My profile in America is that I’m kind of celebrated as one of the greatest singers and I love it.

“I wanna be up there with the Celine Dions, the Whitneys, the Beyoncés and Arethas.

“I go hard because I hope and pray that one day, people look back and go, ‘She could really sing, you know.’ Which is why I keep going.”

The Bang Bang and Do It Like A Dude hitmaker added that it makes her “sad” she hasn’t been asked to perform at the Brit Awards this year  or indeed ever – even though she won Brits Critics’ Choice in 2011.

Despite that she’s performed at the Grammys and MTV’s Video Music Awards.

Since winning Critics’ Choice, she’s been nominated twice for British Female Solo Artist but has failed to win another Brit.

Performers signed up for this year’s Brit Awards so far include Jess Glynne, Adele, Rihanna, Coldplay, Little Mix, The Weeknd and Justin Bieber.

Jessie J is nominated this year for British Video for Flashlight.

The awards take place on 24 February.