Today, JK Rowling is a bona fide literary superstar thanks to her phenomenally successful Harry Potter series, with seven bestselling books, eight film adaptations, a stage production, theme parks, video games and more merchandise than you can wave a magic wand at. But the Edinburgh-based author has admitted that, back in the day, she feared the second book in the franchise wouldn’t live up to the first.

“I remember, a week after I got my American [book] deal, which got me a lot of press, one of my girlfriends rang me and she said, ‘I thought you’d sound so elated,” she told DJ Lauren Laverne in an interview for the Guardian’s Weekend magazine. “From the outside, I’m sure everything looked amazing. But in my flat, where I was still a single mum and I know who to call to do my hair, everything was phenomenally overwhelming.

“For the first time in my life, I could buy a house, which meant security for my daughter and me, but I now felt: ‘The next book couldn’t possibly live up to this’. So I managed to turn this amazing triumph into tragedy, in the space of about five days.”

She continued, “You did the thing that felt natural, and then you’re put in this position where it feels very unnatural. You’re trying to reconnect with this thing that felt normal five minutes ago.” 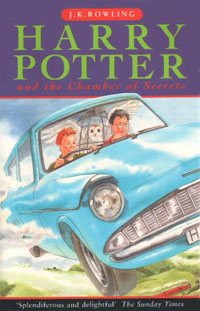 As things turned out, Rowling needn’t have worried. Harry Potter and the Chamber of Secrets, the sequel to the Philosopher’s Stone, repeated the success of its predecessor by winning countless awards and selling millions of copies around the world.

Today, the Harry Potter books are translated into 68 languages and have sold 450 million copies so far worldwide, giving Rowling an estimated net worth of more than $1 billion in 2014, according to the Sunday Times’ Rich List.

Not bad for someone who has said she was “as poor as it was possible to be” before hitting the literary jackpot and not only transforming her own life, but a generation of lives with her magical Harry Potter books.