Legendary comedian John Cleese is threatening legal action against the production company behind a smash-hit Edinburgh Fringe show over what he claims is a “rip-off” of his comedy sitcom Fawlty Towers.

The television icon said he was unaware of the “astonishing financial success” of the Faulty Towers Dining Experience from Imagination Workshop. 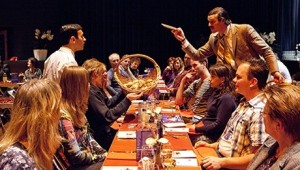 The interactive show – which started in Brisbane in 1997 but has become a feature of the Edinburgh Fringe, where it sells out almost nightly at the Capital’s B’est restaurant – has entertained thousands of people with the antics of actors playing Basil, Sybil and Manuel.

In a series of Twitter posts, 76-year-old Cleese said the production had been using the show’s concept, characters and dialogue “without the need to pay (co-writer) Connie Booth and me a single cent”.

Cleese said: “Seems they thought that by not asking, and by changing the ‘w’ to a ‘u’, they’d be in the clear! Hilarious.

“I’m always learning. I had never realised that ‘tribute’ is a synonym for ‘rip-off’.”

After one Twitter user branded the situation “f****** shocking”, Cleese replied: “That’s the phrasing I’m hoping to use in court.”

Imagination Workshop said it was “staggered” by Cleese’s “vitriol” and said the actor has been aware of the show for years.

In a statement posted online, the company said: “We are not an unauthorised rip-off show – anyone who knows the law in this area will understand that we do not require authorisation to use the concept of Fawlty Towers.

“We are not the bad guys he is painting us to be. It is a shame he has chosen to air his frustrations so publicly rather than contacting us directly about this matter.”

The stage version of Cleese’s show, called Fawlty Towers Live, is set for its world premiere in Sydney in August.

The Faulty Towers Dining Experience returns to the Edinburgh Fringe in August.