Fresh from headlining the main stage at T in the Park a fortnight ago – where they went down a storm with a hit-packed set that included a winning cover of Iggy Pop’s Lust For Life – indie darlings Kasabian have announced a show at Edinburgh’s Corn Exchange on Thursday, 20 August.
Leicester’s biggest musical import since Engelbert Humperdinck, the band have played many times in the Capital over the years, the undisputed high-point being when they headlined Concert In The Gardens as part of Edinburgh’s world-renowned Hogmanay celebrations in December 2007, during which they were joined on stage by none other than former Oasis man Noel Gallagher.
Releasing their eponymous debut album in the early Noughties, Kasabian sold an impressive 700,000 copies in the UK alone and went on to become one of the biggest bands in the UK, shifting millions of records, winning countless awards, and becoming the undisputed victors of the festival circuit over the course of five studio albums – Kasabian (2004), Empire (2006), West Ryder Pauper Lunatic Asylum (2009), Velociraptor (2011) and 48.13 (2014). 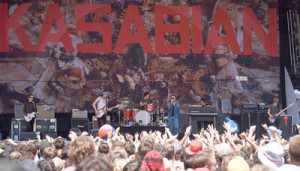 In 2010 and 2014, they collected Q Awards for ‘Best Act In The World’, and they also won a BRIT Award in 2010 for ‘Best British Group’.
In the Capital next month – a gig the band are using as a warm-up for their headline stint at V Festival –  Kasabian will be treating fans to another hit-packed set, playing a host of now-classic tracks like Club Foot, Empire, Shoot The Runner and, of course, Fire, as well as hits from their most recent release, 48.13.
Tickets are on sale now. Visit www.gigsinscotland.com or call 08944 999 990 to get yours.