Kirsten Adamson is the daughter of the late Stuart Adamson, who co-founded punk band the Skids in Dunfermline and went on to enjoy global success with Big Country in the 1980s. Having followed in her father’s footsteps, Kirsten has been in several bands over the years, most notably country rock outfit The Gillyflowers. She recently released her debut album, which she says is “poppy with a darker side”.

I guess it has to be the Indie Referendum. Even more so, the day after the indie ref. It was so sad driving around the city that day. I remember my boyfriend had taken a photograph of a bin with Scottish flags and balloons hanging out of it and I just thought “Wow, how depressing”.

Well, the obvious choice would be myself! I play with another band called the 1004’s and we played a few years ago as part of the Pet Shop Boys line-up, but were on first, so it would be absolutely incredible to headline it at some point! In all seriousness, though, I would love to see Kate Bush play the Gardens – it would be magical.

I have been in Edinburgh for nearly 10 years now, Leith to be exact, and the Port of Leith is always hugely fun. If you’re up for complete nonsense and a want to experience real local “radges” it’s the place to go. 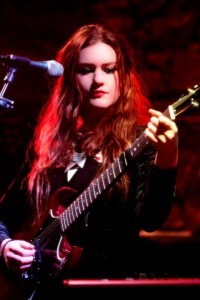 I don’t tend to frequent many bars in Edinburgh anymore, unless I’m singing in them. But when I do, I really enjoy any of the Boda pubs. They serve daft fruity ciders (my fave) and I always run in to some old pal that I’ve not seen for ages.

Tough one. I do love my grub. A few years ago my Gran bought me a voucher for 21212 on Royal Terrace and it has now become a bit of a Christmas pressie tradition from her. I must admit, the food there is out of this world – however, it’s not somewhere that you would treat yourself to very often. So, with that in mind, my favourite place that I do eat regularly in has got to be Kushi’s on Leith Walk. So tasty!

I absolutely love it for the first two weeks and by the last I have definitely had enough. I do appreciate its value to the city, though, and find it completely magical. I think I just go a bit overboard and burn out!

My favourite art gallery has to be the Dean Galleries. It’s a Sunday haunt for me. We do Modern One first, then have a wander and a coffee in Two. Perfect afternoon.

I really like the Cameo cinema and probably go there most often, but the Dominion is pretty special too. It has huge comfy leather sofas and just feels genuinely old and classic.

This is a tough one, too. I really wish we still had the Picture House. It wasn’t the best sound in the world but it was a great sized venue for Edinburgh and I saw some really amazing artists there – Sparks, Todd Rundgren, Ryan Adams, just to name a few. I doubt we will get the same kind of names coming back to Edinburgh without a venue like the Picture House.

The Water of Leith walk is brilliant. In spring you can walk along near the Dean Galleries and find masses of wild garlic.

I’m a sucker for a piece of vintage clothing, so I do love a stroll around the Armstrong’s shops and Herman Brown is also a favourite of mine.

Well, it’s definitely not the Parliament building. What a monstrocity that is! My favourite buildings in Edinburgh are all the private schools, I especially adore Fettes College.

Edinburgh hasn’t changed a great deal since I have been here, but one thing I am glad about is that Leith Walk is buzzing again. I lived there when the tram works were being done and the place just died. So many businesses closed and it just seemed a bit bleak so I am glad it’s recovered from that pointless upheaval.

Kelburn Festival is a fantastic boutique style festival in Largs and is always really supportive of up-and-coming bands from Edinburgh. I have been a couple of times and it always has really fun, friendly atmosphere and is set in a beautiful location.

I’m a bit of a power pop girl, so The Headboys are definitely my favourite Edinburgh band.

Bob Heatlie Snr and Jr. Two of the nicest men you’ll ever meet. Snr wrote a string of hits for Shakin’ Stevens in the 80s along with some very memorable theme songs, including the Fun House and Trap Door music. I do some session singing for him now and again and he’s a great laugh! Heatlie Jr owns Color Sound rehearsal rooms in Haymarket, and is super helpful and supportive of all the musicians and bands that go there. These two are my local heroes.

Cold, beautiful, magical and I’m still not bored yet!