Former Oasis and Beady Eye frontman Liam Gallagher has announced details of a massive UK and Ireland arena tour – including a visit to Scotland on December 4.

Following his intimate run of launch shows and huge festival slots at the likes of Glastonbury and Reading & Leeds 2017, the Mancunian singer will play his biggest solo headline gigs to date – taking in huge venues including Glasgow’s SSE Hydro, London’s Alexandra Palace and the Manchester Arena. 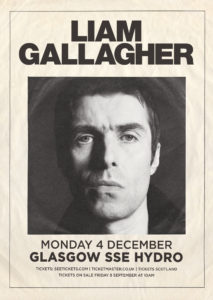 As well as tracks from his soon-to-be-released solo album, As You Were, Gallagher has also been playing a number of Oasis classics at recent gigs.

“[I only sing Oasis songs] when I’m rehearsing it, or if it comes on in a pub or in the car,” Gallagher told indie music bible NME recently. “Turn it up, man.”

He added: “Every one I’m doing, I’m doing because I like singing it.”

Gallagher revealed that he’d definitely be performing ‘Rock ’N’ Roll Star’ and ‘D’You Know What I Mean?’. Speaking of the latter, he said he’d be playing “all seven minutes of it. I’m not doing it for the ‘Be Here Now’ anniversary. I couldn’t give a f**k.”