He’s a busy man, Liam Rudden. A Leither born and bred and entertainment editor at the Edinburgh Evening News for almost 15 years now, he is also an award-winning writer, director and producer. At this year’s Fringe, Liam has a hand in no fewer than a half-dozen productions – all of which are worthy of inspection. Here, we take a look at those six shows… 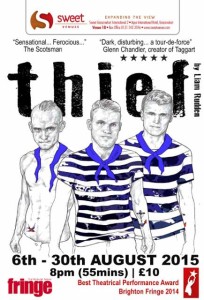 Sailor thrives in the bars, dives and doss-houses of only the most squalid ports.  Look and you will see him. Sailor lives for robbery, imprisonment and expulsion. Be his victim. Sailor’s virtues are simple: rent, theaft and betrayal. Join him.
Inspired by the life and works of poet and vagabond Jean Genet, Thief, a dark and disturbing piece of theatre, won the coveted Best Theatrical Performance Award at Brighton Fringe 2014.
★★★★★ – Sarah Agnew, Brighton Argus
‘Sensational. Ferocious. Acted with great intensity. A memorable hour of theatre.’ – Joyce McMillan, The Scotsman
‘Tantalisingly layered, cloaked in the dreamy mingling of pain, sex and desire.’ – BroadwayBaby.com.
Not for the easily offended. Contains nudity.
Sweet Venues, Grassmarket, 6-30 August, 8pm, £10, 0131-243 3596

And I Ran With The Gang: The Story of Alan Longmuir, the Original Bay City Roller

The 2014 smash-hit sell-out show returns, starring Alan Longmuir.
Written by award-winning playwright Liam Rudden, featuring the hit songs Bye Bye Baby, All of Me Loves All of You, Keep on Dancing, Summerlove Sensation, Saturday Night, Give a Little Love and Shang-a-Lang!
The show is followed by a Q&A with the Bay City Rollers’ legend himself. So, don your tartan and get ready to run with the gang one more time. Rollermania is back!
‘Fantastic night of nostalgia!’ – Gary Flockhart, Edinburgh Evening News
Le Monde Hotel, George Street, 7-31 August (not Saturdays), 7pm, £12/£15,0131-226 0000

A Play, A Pie, A Pint: Silence In Court 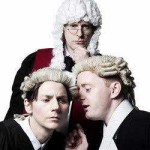 All stand. A courtroom somewhere, anywhere. Charles Brand is charged with raping Jennifer Lyons. Is he guilty or not guilty? Only you, the jury, can decide… there were no witnesses. As the events leading up to the alleged assault are explored, who will you believe?
Silence In Court is an interactive courtroom fiction that draws on real life procedures from a number of legal traditions, creating a mock court in which the audiences are the jury.
‘An uncomfortable, yet engaging and profoundly thought-provoking experience’ – Edinburgh Evening News
★★★★★ – Edinburgh Evening News
Contains themes of sexual violence.
Le Monde Hotel, George Street, 7-18 August (not Saturdays), 1pm, £12.50,0131-226 0000 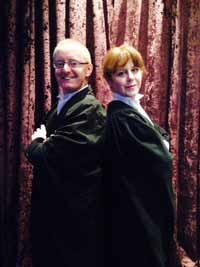 A Play, A Pie, A Pint: Conflict In Court

The long awaited follow-up to Silence in Court received rave reviews when it premiered at last year’s Fringe.
The Right Honourable Marcus Ballie MP is suing Shirley Ann Knot for libel after her paper, The Daily Globe, ran a story claiming he paid a rent boy to spend the night with him. A family man, the Tory MP claims there is no truth it the claim and is seeking damages. It seems like a straight-forward case until an unexpected witness arrives to take to the stand. Who will win, tabloid editor or Tory MP?
Only you, the jury, can decide.
★★★★ “Conflict in Court is one of the best interactive theatre experiences you are likely to encounter…” – Public Reviews
Le Monde Hotel, George Street, 19-31 August (not Saturdays), 1pm, £12.50,0131-226 0000 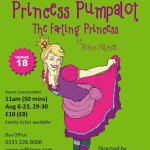 The 2013 and 2014 five-star Fringe hit returns.
She’s a princess and she farts. What more do you need to know? Can Princess Pumpalot protect Wiffyville Castle from the invasion of Low-Flying Gnomes? Will she win her battle with the nasty prince? Who will take her to the Royal Birthday Ball?
Based on the top-selling book, this is a fast-paced, fun-packed show for all the family. Get your day off to a perfect start with Princess Pumpalot: The Farting Princess, directed by Liam Rudden.
★★★★★ – Black Diamond FM
Warning: farting will take place during this performance and audience participation is compulsory!
Sweet Venues, Grassmarket, 6-23 &29-30 August, 11am, £10, 0131-243 3596

May I Have The Bill Please? The world premiere of the hilarious new comedy from Robin Mitchell, writer of the hit show Princess Pumpalot: The Farting Princess.
We’ve all been there. The meal is over. It’s time to settle up. But who had what?
Two couples agree to split the bill, leading to confusion and laughs galore as their true personalities are revealed; in future you’ll agree to go Dutch!
Directed by Liam Rudden.
★★★★ – Edinburgh Evening News
Edinburgh Playhouse (Boards), Greeenside Place, 5-29 August (not Sundays), 2pm, £10, 0131-226 0000
Share this article: