Edinburgh-born singer KT Tunstall was, by her own confession, burnt out and ready to give up music before rediscovering her mojo and recording her September-released sixth studio album, Kin.

Given how much she seems to be enjoying herself on stage these days, it’s clear the time she spent in Venice Beach, California, where she relocated to in 2014 to recharge her batteries and start a new life following the breakup of her marriage, has done her a power of good.

Oozing with charm, charisma and, as we’ve come to expect, no small amount of musical talent, the 41-year-old had the crowd rapt for the entirety of her set at Friday night’s sold out hometown gig.

It’s easy to forget just how many great songs KT is responsible for, and that includes a fair few of her newbies as well as fan favourites like Black Horse And The Cherry Tree and Other Side Of The World. Both the old and new were present at the Queen’s Hall, and all were rapturously received.

The singer’s cover challenge brought plenty of fun to proceedings, while her blues-infused cover of Soundgarden’s Black Hole Sun, a tribute to the late Chris Cornell, delighted the crowd. 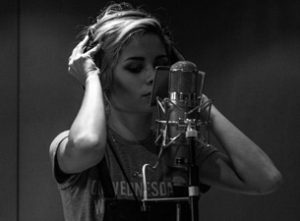 Warming up the audience for the headline act on Friday was Edinburgh’s own Nina Nesbitt.

Having made her name on the local scene as a precociously-talented teen in the vein of Laura Marling and Kate Nash, the Balerno-born singer was pushed in a more commercial direction when she signed to a major label.

It was a dramatic reinvention, for sure, and in an interview with AAA last year Nina admitted that she felt uncomfortable singing shiny pop songs and making big budget pop videos such as the one for her single Chewing Gum which had her frolicking in a shower with a half-naked hunk.

“I did a tour when Chewing Gum came out,” Nina told AAA. “I can say now that I felt so uncomfortable on stage. It all felt so wrong, everything about it was wrong. I needed to go back to the drawing board.”

This she did and, as the early birds in attendance at the Queen’s Hall will testify, the half-Scottish, half-Swedish songwriter has ditched the sugary pop and is back presenting the best possible version of herself.

Still only 22, Nina has time on her side, and snatching back her career from the mighty Universal Island label will prove to be the shrewdest of moves.

She’s a fantastic songwriter, for sure, and while her support set was only half an hour long, she had no problem winning over the crowd during an intimate acoustic performance.

Free from the constraints of the music industry “machine”, Nina is set to live up to her potential and become a huge star – but on her own terms.