Just as Garbage frontwoman Shirley Manson had done at Edinburgh’s Usher Hall the same evening, Madonna interrupted her show in Stockholm last night (November 14) to pay an emotional tribute to the victims of the Paris terrorist atrocities.

In a six-minute speech ahead of performing her 1989 hit Like A Prayer – which Madge dedicated to the victims of the attacks – the US superstar admitted she nearly cancelled her performance and explained why she had ultimately decided to go ahead with the gig.

“This whole show is about celebrating life and standing up for your rights, fighting for what you believe in,” said Madonna. “It’s been very hard for me to get through this show up to this point and not forget about what happened last night so I need to take this moment to acknowledge the tragic killings, assassinations, and the senseless endings of precious life that occurred last night in Paris.

“It’s disturbed me all day,” she went on, “and it’s been really hard to get through the show because in many ways I feel torn. Why am I up here dancing and having fun when people are crying over the loss of their loved ones? 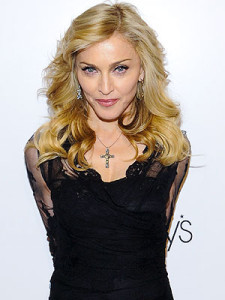 The 57-year-old superstar explained that the reason she wanted to go ahead with the concert was to make a statement. “That is exactly what these people want to do. They want to shut us up. They want to silence us. And we won’t let them. We will never let them. Because there is power in unity and I do believe that as much chaos, and pain, and senseless violence and terrorism that occurs around this world – not just in Paris – as much of that does occur, there is more goodness in this world. We are here to prove it.”

Madonna went on, “I was gonna cancel my show tonight, but then I thought to myself ‘why should I give that to them? Why should I allow them to stop me, and to stop us from enjoying freedom?’ All of the places where people were killed were places where people were having fun. People were enjoying themselves. Eating in restaurants, dancing, singing, watching a soccer match. These are freedoms that we take for granted of course, and we must not, but they’re freedoms that we deserve, we work hard and we deserve to have fun and there is no one in this world that should have the right to stop us from doing what we love.”

The singer also urged people to treat one another with respect. “The way we change the world is that we change the way we treat one another on a daily basis in the simplest ways. We must start treating every human being with dignity and respect and this is the only thing that will change the world. This is the only thing. Only love will change the world. But it’s very hard to love unconditionally and it’s very hard to love that which we do not understand. or that which is different than we are. But we have to. Or this will go on and on forever.”

At the end of her speech the singer held a moment of silence, before beginning her rendition of Like A Prayer, during which she exclaimed, “No more war!”