Over the course of almost four decades, pop chameleon Marc Almond has fashioned an astonishing, idiosyncratic and esoteric career.

There have been massive hits (they don’t get much bigger than Soft Cell’s Tainted Love), heroic misses, ventures into almost every musical genre from Russian folk to techno, projects with an incredibly varied roll call of collaborators – recordings with Antony Hegarty, Tony Visconti, Nico, Siouxsie Sioux, Jools Holland’s Rhythm And Blues Orchestra and Gene Pitney sit alongside projects with Throbbing Gristle and Brian Reitzell – as well as a huge canon of original compositions rubbing shoulders with songs written by Jacques Brel, Scott Walker, Guy Chambers and even dark magus Aleister Crowley. 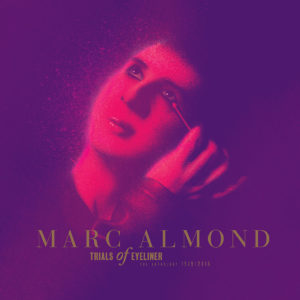 Top of the Pops and Tainted Love made him an instant and bona fide pop star with Soft Cell, “but in our head it was still a kind of college art project,” says Almond. “We thought: we can be a pop band, but what we’ve got to do is provoke people, shock them, wake them up, be subversive. We were pulling two ways.”

“What we’ve got to do

That last sentence pretty much sums up Marc’s extraordinary career over the subsequent 35 years.

It’s lurched unpredictably between extremes: he is the only artist in the world to have collaborated with both Gene Pitney and Jim “Foetus” Thirlwell, to have resurrected both David McWilliams’ cod-psychedelic novelty hit The Days Of Pearly Spencer and the oeuvre of dissident Russian tenor Vadim Kozin, to have performed on Open House with Gloria Hunniford and at the debut live performance by post-industrial legends Coil, during which he sang while Coil’s Peter Christopherson and John Balance gave themselves fake-blood enemas onstage.

Viewed as a totality, his work shouldn’t make any kind of coherent sense, but it does, bound as it is by a unique aesthetic that pervades everything he does.

Personally curated and overseen by Marc himself, the 10-CD Trials Of Eyeliner box set is both the first and the definitive career overview of one of contemporary music’s best respected, most consistently inventive artists – from the huge pop success of Soft Cell to the tormented beauty of the Marc And The Mambas projects to a dazzling solo career that’s encompassed smash hits, cutting-edge electronica, torch songs, rock ‘n’ roll and much, much more.

The 10-disc set is themed into three sections: the four-disc History recounts Marc’s journey via his favourite and best-loved album tracks and B-sides; Singles gathers together all of Marc’s official Soft Cell, Mambas and solo singles in (mainly) chronological order for the first time; finally the 3-disc section ‘Gems’ pulls together nuggets and rarities from fan-only releases, one-off collaborations, and soundtracks contributions and includes 18 tracks previously unreleased from Marc’s own collection.