Before the wild child singer became infamous for twerking with Robin Thicke, she shot to fame at the age of 11 in the Disney Channel TV show Hannah Montana, a series about a schoolgirl with a secret double life as a teenage pop star. And now she’s returning to her acting roots.

Allen’s as-yet-untitled series will air on Amazon Prime and is set in the Sixties.

Shooting on the six half-hour episodes begins in March with reports stating that Allen has cast Cyrus in one of the lead roles. 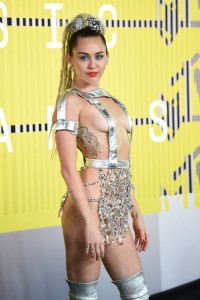 The 23-year-old singer and actress confirmed the news with an Instagram post, showing a painting of the Annie Hall star along with the caption: “F*** yeah ! Stoked to be in Woody Allens first series!!!!!

“I had claimed 2016 to be my year of ‘chillin the f*** out’ but next to my bed for a few years now has been this portrait of W.A. & I was looking into his eyes when I got the call to be a part of the cast and work alongside the bad a** Elaine May & da dude himself! 1960zzzz here I cummmmm.”

Cyrus will be joined by Elaine May, who previously worked with Allen on the film Small Time Crooks.

“Woody Allen is a visionary creator who has made some of the greatest films of all-time, and it’s an honour to be working with him on his first television series,” said Roy Price, Vice President of Amazon Studios.

Allen, whose most recent film, Magic in the Moonlight, came out in 2014, added, “I don’t know how I got into this. I have no ideas and I’m not sure where to begin. My guess is that Roy Price will regret this.”