And now for something completely different… the visit of Molotov Jukebox, those world-renowned party purveyors of contemporary world music, fronted by the multi-talented Natalia Tena, who plays Nymphadora Tonks in Harry Potter, Osha in Game Of Thrones, and had a starring role in the T In The Park-set movie You Instead. 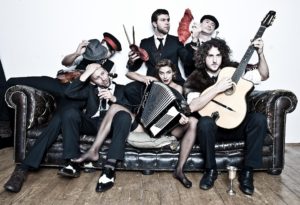 Following on from the success of 2014’s hotly-received debut Carnival Flower, the London-based six-piece released second album Tropical Gypsy on April 15 – and like its predecessor, it displays a truly riotous whirlwind of Latino-influenced horns, accordion and violin, all tightly bound together over guitar, bass and drums by the infectious vocals of musician and actress, Natalia.

Incorporating newly found sounds collected first hand on a South American tour last year, the band have added flavours of samba, fohó and cumbia to their existing Balkan influences, as anyone heading to their gig at Electric Circus tomorrow night (April 29) will discover.

“We’ve made this album with a lot of passion and pulse, whilst using every artistic bone in our bodies to develop and focus our style and sound from the past album,” says 31-year-old Natalia, who was born in London to Spanish parents. “We are incredibly grateful to be able to do the thing we love for our fans that understand what our music is about and where we are going with it. Get your dancing shoes ready.”

I was obsessed with Fight Club during my adolescence. I must have seen it over 49 times. I wanted to be Helen Bonham Carter and heavily fantasised about both Brad Pitt and Edward Norton. Then again, there is always Dirty Dancing. No idea how many times I’ve seen it and how many times I’m tried to dance to it (very badly, drunk). I love that soundtrack.

Tracks Of My Tears by Smoky Robinson. Heartbreak never sounded so soulful and sexy.

This is a pretty hard question. I’ve sat staring into the distance now for 30 minutes. F*ck. Um. Maybe I’ll go one that affected me when I was a kid. Etta James’ At Last just blew my mind and listening to her voice feels like flying.

Boban Markovic Vs Fanfara Ciocarlia – Balkan Brass Battle. I saw them in Brighton and then again the next night in London at KoKo. It was a whirlwind of gypsy horns that would raise the dead and make them sweat for their money. Absolute heaven.

House of the Spirits by Isabel Allende. It’s the only book I have in both English and Spanish. There’s a cause and effect philosophy in her stories where you see how the past with its ancestors brings you to the present. This books explores so much of the domestic darkness of humanity, but makes you laugh out loud with its sheer truth and humour.