It’s fair to say that former Balerno High pupil turned pop princess Nina Nesbitt has come a long way since being discovered by Ed Sheeran at the age of 16. Now 21, she’s firmly established herself as one of the brightest young talents around.
Having stormed on to the scene with some impressive early singles and EPs, the half Scottish, half Swedish singer released debut album Peroxide last year to rave reviews. It reached a very credible No.11 in the UK charts, making her the first Edinburgh-born solo artist to have a hit album since KT Tunstall, and, by our reckoning, the youngest Edinburgh-born singer ever to have a Top 20 album.
Impressive stuff, and it’s only just the beginning for this talented young singer-songwriter, who has been compared to fellow Brits Ellie Goulding and Laura Marling.
Nina is currently hard at work on her eagerly-awaited second album, but she took time out earlier this week to chat to AAA.

Definitely the Edinburgh Festival! It’s such a busy time for the city and usually we have a few sunny days, which makes a change. It’s great to have so many people from all over the world visiting our city.

I would choose Biffy Clyro because they’re my favourite Scottish band and I feel like their songs are quite anthemic, which is always great for a New Year sing-along.

Anything along the Grassmarket is great. Too many to choose from. Pub crawl advisable.

I like old gritty ones with a bit of character and history. I’m not really in to posh bars, but I do love Tiger Lily for that type of thing. 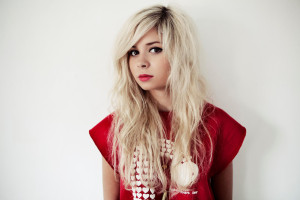 I love the Festival. I always enjoy being in busy cities full of people from all over the world. It’s also fun to see lots of interesting artists and creative people around the city.

The Scottish National Gallery is always really interesting to visit. I haven’t been to many others if I’m honest.

Fountain Park, purely because it has a Nandos next to it.

I love Electric Circus for small gigs and Liquid Rooms is great for bigger ones. The Usher Hall is obviously pretty cool for big gigs but I prefer the smaller, dingier venues with a lot of character in them.

“I prefer the smaller,

with a lot of

I like to go up the reservoirs in Harlaw when I’m back home. It’s so close to where I stay and you feel like you’ve travelled to the top of Scotland when you’re there because it’s so peaceful and secluded. Arthur’s Seat is also great to walk up – the views are amazing.

I’m not a massive shopper, but I guess Princes Street or George Street are great for that.

Edinburgh Castle, because it holds so much history and is so unique compared to any other city.

The trams are finally here, which is exciting. I was gutted when the Picture House shut down as it was always my dream venue to play – I feel like Edinburgh is really lacking medium-sized venues and it would be great if there were more to open in the future.

T in the Park. For obvious reasons. Always the best crowds by far out of any festival.

I don’t really know any bands specifically from Edinburgh, but there are so many great bands and artists to come from Scotland – Biffy Clyro, Paolo Nutini, Texas, etc.

The walking man. He’s a well known character, who walks the 44 bus route most days. He sure is motivated and should be a fitness inspiration to us all!