The title for the forthcoming Oasis documentary, which is due in cinemas this October, has just been announced – and it’s going by the name Supersonic.

The film’s distributors have also unveiled a teaser poster, which you can see below.

Taking the name of the Manchester band’s anthemic 1994 debut single, the documentary gives unprecedented access to the generation-defining band, allowing a rare and candid insight into their world along with never before seen archive material. 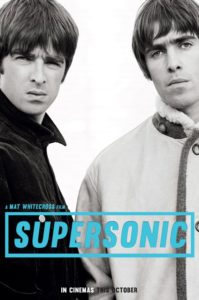 The team behind Amy Winehouse biopic Amy, award-winning filmmaker Mat Whitecross and Academy Award-winning producer James Gay Rees, have immortalised the band’s journey from the moment when Noel Gallagher joined his brother Liam’s band – the two boys who shared a bedroom growing up, were now sharing a stage.

From the release of Definitely Maybe – which at that moment became the fastest-selling debut of all time – it was then less than two years before their historic shows at Knebworth Park, where they played to 125,000 fans per night.

They could have played 20 nights, as 2.6 million people applied for tickets.

As Liam Gallagher says, “Oasis was definitely like a fucking Ferrari, great to look at, great to drive and it will fucking spin out of control every now and again when you go too fast. I loved every minute of it.”

Recently, Wonderwall by Oasis was named as the Best British Song of All Time in a special Radio X poll.

“What can I say? The people have spoken,” said Noel Gallagher after hearing of the accolade. “The fact that there wasn’t one single Noel Gallagher’s High Flying Birds song in the top 20 makes think the whole thing is a mockery of an unreliable sham!

“Saying that, though, I’m thrilled,” he added.

Remarkably, Oasis held four places out of the Top 5 in the chart, with the 1995 classic Wonderwall followed by Don’t Look Back In Anger (2), Champagne Supernova (3) and Live Forever (4).