Scottish actor Peter Capaldi has said that the new Doctor Who companion must stand up to his character in the classic sci-fi series, adding that Jenna Coleman’s replacement needs to question the Doctor’s actions.

Capaldi, who was cast as the Doctor in 2013, recently confirmed that a new assistant been chosen for the cult show, and that they offer a “different sort of take” on the role. 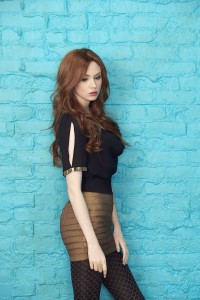 Judging by comments Capaldi made in a recent interview given to Mexican blogger La Lata, rumours among fans that a male actor could take on the role seem far off the mark.

In recent years, the role of the Doctor’s companion has been filled by Billie Piper, Karen Gillan (pictured) and Jenna Coleman, with the latter’s Clara Oswald departing in the most recent series and opening up a vacancy alongside Capaldi.

Last month, Capaldi said the BBC should invest more in regional drama in a bid to better reflect the people who fund it.

Speaking to Newsweek, Capaldi said, “It does frustrate me. If you’re going to have a family show, I think you have to build up a little ritual around it, and that ritual usually starts with having it on at the same time [every week]. Even I didn’t know what time it was on because it got later and later and later.

“Undoubtedly the BBC is an incredible organisation, but… sometimes people there think that’s looking after itself. And it’s not being looked after. I think maybe their eye was taken off the ball, or the show was seen as a thing they could just push around. It’s not. It’s a special thing.”

Doctor Who is not due back on our screens until the Christmas special on Christmas Day 2016.