Pollyanna McIntosh is a three-time award-winning actress best known for the Sundance hit The Woman and for films as diverse as Sex and Death 101, Land of the Lost, Burke & Hare, Exam, FILTH, Love Eternal, Let Us Prey and White Settlers.
Her latest film is Tales of Halloween (watch trailer below), which has just been released in US cinemas and digitally in the UK.
Her television work includes a series of Bob Servant Independent, playing Philippa Edwards, two series of MI High, playing The Crime Minister, and guest roles on Waterloo Road and Casualty.
She plays a leading role in the upcoming Sundance Channel series Hap and Leonard alongside James Purefoy, Michael Kenneth Williams and Christina Hendricks.
As a writer, she has three feature films in development, including her directorial debut, the dark comedy, Perfect.
She has also written columns and essays for publications such as Crave, Honeysuckle and Flux on everything from the beauty myth to how mental health is represented in film to craft ale.
Born in the Highlands, Pollyanna was raised in Edinburgh from 9-16 years old and returns as often as possible to the city she loves.

A couple of years ago I was in town for Hogmanay and they held the first torch light procession where you could buy a great flaming torch with the proceeds going to charity. I had my American boyfriend in town and we headed down all wrapped up in winter gear. The crowd was huge, full of families and high spirited despite the occasional drizzle as we made a procession down the mound from the Tron to great music. We encountered Vikings and revellers along the way to Carlton Hill and the procession ended there in fabulous fireworks. It was a joy to do and know the fun was also doing some good. Seeing my fella, used to his own country with stringent safety laws (which I consider dumbing to be honest) grinning with delight at carrying a big ole flaming stick was also a laugh.

Florence and the Machine. They’re big, rousing and electrifying live. Their front woman is a force of nature and her red hair is Celtic enough for us to claim her as our own.  Paola Nutini would be fab too. He’s also a soulful one and, of course, a Scot.

The Sheep’s Heid is in a great setting and I love their wee old fashioned bowling alley.

For a group or intimate dinner I always enjoy The Outsider on George IV Bridge near the top of Victoria Street. The food is always tasty, the views of the castle by candlelight are fab, the staff are friendly and I like the old building it’s in. The Dogs has inventive delicious food at great prices and in a great location too. For lunches, The Secret Herb Garden on Old Pentland Road is a new and amazing herb nursery with a large wild conservatory where they serve great lunches and cakes. The smell of the plants, the vines growing around you; it’s heaven. They even sell art and garden furniture.

If I loved it any more I’d have it for my tea! Such a great atmosphere, so much creativity and I always love seeing new plays, new comedians as well as getting to see some old and international favourites. The city buzzes. I can’t get enough.

The Scottish National of Modern Art for its Moore sculpture filled gardens, modern art in an unpretentious setting and the memories of discoveries during school trips, trips with my Nana and most recently with my big sister.

Edinburgh has great independent cinemas and of course a great film festival that utilises them well. The Filmhouse has to be number one for me because of how many wonderful films I’ve seen there for the first time, their diverse food in their cafe and the great selection of DVDs in their shop. I’ve had Scottish premieres of three of my own films there (Exam, The Woman and Let Us Prey) and sharing those with my hometown’s audience has been great too. The Cameo is also fab and was where I first found indie films in high school with my best friends Kooth, Sonic and Holly. Reservoir Dogs, Priscilla Queen of the Desert and Dazed and Confused stick out from back then. You only asked for one but The Dominion is also a cinema I truly love. My mum used to take me and my sisters there and it’s still family run, has big and smaller films, now incredibly comfy seats and sofas, a cinema you can hire for parties and….free Pringles!!! 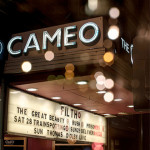 My sister’s house where my teenage nephew Hamish is always jamming on his guitar or writing music on his computer. The music spills out from his room through the whole house and so his energy is palpable wherever you are. He’s talented, curious, hard working and plays with real soul.

I still love a walk up Arthur’s Seat, whatever the weather. The terrain feels unique, the views incredible and it gets your blood pumping. I’ve had a lot of laughs on that old volcano too.

I always head to Barclay Place by the grassy Links with it’s wee public 9 hole golf course which you might not know you were walking over,  to my favourite shop Totty Rocks. It has inventive, stylish coats, dresses and more with funky decor and huge sheepskin-rugged changing rooms. Their collections are made in Scotland, they take commissions of anything you want made and the shop has a great atmosphere of Scottish lasses having a laugh. The owners can often be found running something up in the shop which is also fun to see. From there I’d pop across the street to Miss Dixie Belle’s for vintage inspired dresses and underwear. Again the staff are lovely and they have a vintage style hairdressers in the back where they can whip your hair up into a 40s/50s or 60s sensation. On that street there are also a few charity shops to poke about in, a treat of an off license with knowledgable upbeat staff, The Thirsty Crow for a cocktail in their garden and after I could wander down to The Cameo cinema or The Kings Theatre for a show.

Traditional but The Castle is a big old comforting friend which is still mysterious and exciting to look up at.

The explosion of good food.

It’s got to be the fringe.

My friend Laura Nolan suffers great grief after losing her son but her passion to save others from suicide means she has created The Joshua Nolan Foundation. One by one the foundation helps fund counselling for those who cannot afford the astronomical cost of what should be much much better supported by our government and the NHS. Laura’s strength and passion to help are inspiring. Mental health issues are still taboo and untackled for many and much of this is a financial issue. You can help:
www.JoshuaNolanFoundation.org

Big but cosey, ancient but brimming with new creativity.