A brand new production of Chitty Chitty Bang Bang flew into Edinburgh’s Festival Theatre last night – and you can catch it until Sunday, 16 October.

Based on Ian Flemming’s classic story and the subsequent iconic film starring Dick Van Dyke and Sally Ann Howes, Chitty Chitty Bang Bang follows the story of the lovable but wacky inventor Caractacus Potts. When Baron Bomburst demands that all children be vanished from his kingdom, Potts’ family and the beautiful Truly Scrumptious must find a way to escape from the evil Child Catcher. 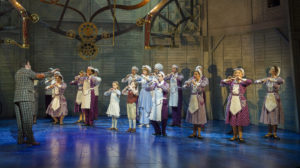 The big-budget stage production will feature a live orchestra and an all-star cast including comedian Jason Manford (Sweeney Todd, The Producers), Claire Sweeney (Educating Rita, Chicago), Phill Jupitus (Hairspray, The Producers) and Charlotte Wakefield (Mama Mia, The Sound of Music). It will be the first time the musical has been professionally performed in Edinburgh for years. It is directed by West Yorkshire Playhouse Artistic Director James Brining, with stunning new choreography by Stephen Mear.

Chitty Chitty Bang Bang was once again thrust into the spotlight earlier this year when actor Dick Van Dyke and three members of his acapella quartet, The Vantastix, were filmed performing an impromptu rendition of the film’s iconic theme tune whilst eating breakfast at a Denny’s restaurant in Santa Monica, California. The 90-year-old, who was in town for a local television appearance to promote an upcoming event, shocked fellow diners when he broke out into song whilst eating pancakes at the budget US chain restaurant.

Van Dyke shot to fame in 1964 when he was cast as Bert in Disney’s Mary Poppins, before taking the lead role in Chitty Chitty Bang Bang. He has been performing at charity fundraising events with The Vantastix since 2000.