Inspired by the 1990 Academy Award-winning film, which starred the late Patrick Swayze, Demi Moore and Whoopi Goldberg, the musical will follow the movie’s timeless story of love, despair and hope.

Although the musical was performed in Edinburgh back in 2013, the current production will feature an expanded book, new music and original staging. 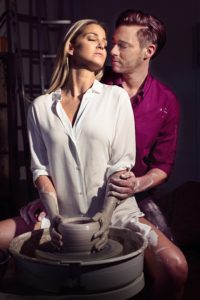 Sarah Harding rose to fame as a member of Girls Aloud after being selected to be a part of the group through ITV talent search show Popstars: The Rivals. The group went on to release seven albums, win one Brit Award and achieve no less than four number one singles.

Speaking of her role in Ghost the Musical, Harding said: “I’m absolutely delighted to be making my theatre debut in Ghost the Musical. The film is one of my all-time favourites, so to get the opportunity to play Molly in Bill Kenwright’s new production is a huge honour for me.”

Bill Kenwright, the iconic producer behind The Sound of Music, Joseph and the Technicolour Dreamcoat and Blood Brothers, commented: “Ghost is a story full of hope, and is one of those films which never leaves you. The book by Bruce Joel Rubin and score by Dave Stewart and Glenn Ballad come together wonderfully in one of my favourite new musicals in years.”

Ghost the Musical premiered at the Manchester Opera House in 2011 before enjoying a successful run at the Piccadilly Theatre in London’s West End. The production then transferred to Broadway’s Lunt-Fontanne Theatre in 2012, before embarking on a UK tour.