Scotland is renowned for myths, legends and folklore and, from Friday, there is going to be some seriously spellbinding activity going on in the Capital.

MagicFest, which brings together some of the world’s greatest magicians, illusionists and mind-readers, is set to return for its seventh consecutive year with its biggest line-up to date. Here at AAA, we’ve decided to put all our cards on the table and reveal our top picks from this year’s programme…

Brand new for 2016, this multi-room experience at Summerhall offers visitors the chance to lose themselves in all MagicFest has to offer. A single ticket (from £12) will give you access to up to 10 different live magic shows, as well as pop-up bars, street food, music, comedy and even a ribbon maze!

Those under the age of seven can attend the morning sessions (10am – 2pm) free of charge, during which they can enjoy Magic School workshops, treasure hunts and six different live magic shows.

The afternoon sessions (2pm – 6pm) are suitable for those aged 7+ and feature a mixture of close-up, theatrical and stage magic from the likes of Gary Dunn and Tricky Ricky. The evening slots (7.30pm – 11.30pm) include horror-themed magic from Luke Easton in the Anatomy Room and a special VIP performance from BBC’s The Real Hustle star R. Paul Wilson.

If MagicFair doesn’t quite whet your appetite, Magic a la Carte (£50) might be for you. Set to take place on Thursday, 7 July, tickets to the exclusive event include a three-course meal at Tiger Lily and private, table-side performances from TV magic consultant Lewis Barlow, former Scottish Close-up Magician of the Year Billy Reid and Scottish champion Chris Dinwoodie.  A rare opportunity to see these master magicians up-close.

Though the MagicFest programme is dominated by Scottish talent, it also features a special one-off performance by iconic Spanish magician Juan Tamariz, known to be one of the most influential contemporary magicians in the world. His show, which takes place at George Square Theatre on Saturday, 9 July, will be his first performance in Scotland and should not be missed. Tickets are priced from £16.

The annual MagicFest Gala Show (from £14) has become so popular over the years that a matinee performance has had to be added this year. The glittering finale to the festivities will take place at The Festival Theatre on Saturday, 8 July and is suitable for those aged five and over. The uplifting show will feature some of the world’s most celebrated magicians and illusionists including South Korean Digital Time Traveller Hun Lee, mind-reader Colin Cloud and hula hoop artist Miss Polly Hoops. 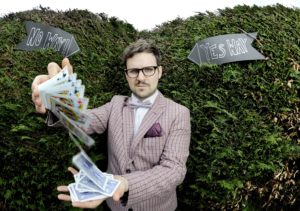 Quantum was mentored by Penn and Teller, suggesting this show (from £11) will be one of the highlights of the entire festival. Illuminations will be performed at the Scottish Storytelling Centre on Monday, 4 July.

AAA has teamed up with the organisers of MagicFest to offer one lucky reader a pair of tickets to a MagicFair Lates session of their choosing. For your chance to win, simply follow us on Twitter (@aaa_edinburgh) and retweet the competition post. Be quick as the competition closes on Wednesday morning. Usual AAA rules apply. Editor’s decision is final.

MagicFest runs from Friday 1 until Saturday 8 July. For tickets or more information, visit www.magicfest.co.uk or call 0131 226 0006.