Expect to be transported back to a bygone era when The Glenn Miller Story rolls into The Edinburgh Playhouse next week.

Based on James Stewart’s box-office smash hit, the musical tells the story of one of America’s greatest Big Band leaders. It features a 16-piece orchestra and a cast led by Tommy Steele, Britain’s first rock ‘n’ roll icon.

The 79-year-old, who has previously performed in Hans Andersen and Singin’ in the Rain, has no qualms about portraying the legendary singer, who infamously disappeared whilst travelling to entertain the troops in Paris during the Second World War when he was only 40-years-old.

“I start it as me at 78, and get younger,” he explains. “I am Glenn Miller. James Stewart played him when he was 60. Age doesn’t matter as much in theatre as it does in film – people break out into song and dance, and that’s not real, so anything can happen. You don’t really retire from showbiz and I’m doing what I love. You can’t ask for more than that, can you?” 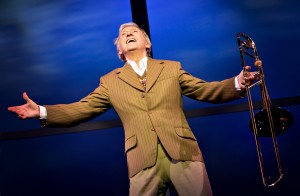 Tommy may have had more than 20 hit singles of his own, but he still considers stepping into the shoes of one of his biggest idols to be a huge honour.

“Glenn Miller is my idol -I was taken by my parents to see him when I was a little boy,” he says. “Today, all I can remember is this wonderful sound and then came the mystery of his death.

“It’s a great story. Glenn Miller was a man searching for the perfect sound and I loved that whole tale of him being so meticulous about his music.

“When you add that to the tragedy, you have all the material for a musical theatre show. It’s an adventure in music you won’t stop tapping to.”