Given her status as TV royalty, it’s easy to forget that the late Cilla Black was initially thrust into the spotlight as a talented singer, championed by The Beatles.

Based on the hit ITV biopic, Jeff Pope’s Cilla the Musical transports its audience back to the 1960s to chart her meteoric rise from being a young, working-class secretary in Liverpool to being a famous singer, riding high at the very top of the music charts.

The feel-good show features not only all of Black’s greatest hits, including Anyone Who Had a Heart, 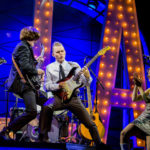 You’ve Lost That Loving Feeling, Alfie and It’s For You, but also a host of other songs that defined that era including Twist and Shout, You’ve Got To Hide Your Love Away and I Like It. Whilst the show primarily focuses on Cilla’s career and her complicated relationships with Bobby Willis and her infamous manager Brian Epstein, it also offers a charming snapshot of 1960s Britain.

Kara Lily Hayworth embodies Black’s likeable personality with her authentic performance throughout but it’s her stunning vocals that ultimately leave a lasting impression. She has many shining moments, but her best comes during her spine-tingling solo performance of Anyone Who Had a Heart at the end of the first act. The future looks incredibly bright for this young star, who was cast as the lead after attending an open audition. It’d be unfair not to mention Carl Au, who does a great job of portraying Bobby Willis, Cilla’s on-off boyfriend and eventual husband. The actor brings heart and charm to the role, leaving the audience rooting for him from the very start.

An unexpected all-round hit, Cilla the Musical is a lorra, lorra fun.