For most people, the word Disney conjures up images of cheerful characters, catchy songs and mystical lands.

Disney on Ice’s latest show, Passport to Adventure, delivers on all counts. Characters from some of Disney’s most beloved movies are brought to life through colourful costumes, stunning skating and iconic music in the show, which is produced by Felt Entertainment. 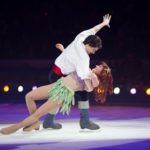 memorable destinations from Disney movies including Neverland, the African Pride Lands, Ariel’s mystical underwater kingdom and the wintery town of Arrendalle from Frozen. The breadth of films covered in this show is commendable and results in a much more balanced performance than in previous tours, some of which have been very Princess-centric.

The skating during The Lion King segment is particularly exciting to watch, with the duo portraying Simba and Nala showcasing some highly impressive skating spins, flips and tricks, including the infamous “head banger”. It is remarkable that even those in large, bulky costumes are able to glide so fluidly across the ice.

The Little Mermaid and Peter Pan sections were fun, uplifting and nostalgic but it was the Frozen finale, complete with dazzling special effects such as falling snow and pyrotechnics, that really brought an extra flurry of magic to the production. Watching thousands of excited little kids join Elsa in belting out the chorus of Let it Go, it’s hard to dispute that Disney magic is here to stay.