Of all the Disney classics that Feld Entertainment have used as the basis for Disney on Ice tours over the years, Frozen is the one that lends itself best to an on-ice adaption. 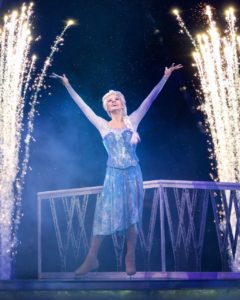 The 2013 Oscar-winning hit, which has overtaken Toy Story 3 as the highest grossing animated movie of all time, is set in the beautiful, wintery kingdom of Arendelle. It follows the story of a brave Princess called Anna that sets off on epic Scandinavian adventure to find Elsa, her estranged sister who has inadvertently trapped their kingdom in eternal winter with her icy superpowers. Along the way, Anna meets a host of quirky characters including a delightful snowman named Olaf who naively dreams of experiencing a hot summer and a kind iceman called Kristoff.

Unlike previous Disney on Ice productions, which tend to condense several Disney films down into short segments to fit the logistics of a stage show and are primarily driven by their iconic soundtracks, Disney on Ice presents Frozen offers a full theatrical experience. Highly-skilled figure skaters glide across the ice with ease, demonstrating spins, flips and intricate footwork whilst acting out the full story in tandem with an audio recording of dialogue and iconic songs from the film. Impressively, even those sporting bulky costumes whilst portraying large characters such as Olaf and Sven moved fluidly across the ice, successfully bringing the beloved characters to life for the excited children in the audience.

Dazzling special effects such as falling snow, pyrotechnics and a giant inflatable Marshmallow Snow Monster added an extra flurry of magic to the production and, if the crowd’s reaction was anything to go by, Frozen’s appeal doesn’t look set to thaw anytime soon.

Disney on Ice presents Frozen is currently skating across the UK. Tour dates and more details can be found on www.disneyonice.co.uk