The controversy surrounding Sarah Harding’s role in the touring production of Ghost the Musical has, so far, overshadowed an otherwise stunning production.

Of course, the scathing reviews she’s attracted for her portrayal of Molly beg the question – is she really that bad? Put simply, the answer is no. Whilst she fails miserably in terms of maintaining her character’s American accent, her vocals come across as surprisingly polished during With You and there’s clearly chemistry between her and leading man Andy Moss. 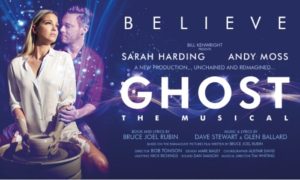 Jacqui Dubois, on the other hand, turned in an undisputedly stellar performance as the charming and hilarious clairvoyant Oda Mae. With a voice as bold and striking as her colourful stage costumes, she captivated the audience with every line and did justice to the role that was made famous by Whoopi Goldberg.

Ghost the Musical is so visually stunning that it comes as no surprise to learn that there is a professional magician on the creative team. Richard Pinner’s illusions, coupled with Nick Riching’s imaginative lighting, really brought the story to life without ever coming across as needlessly indulgent. The scenes which depicted spirits leaving human bodies and ghosts walking through wooden doors were particularly impressive to watch.

This time round, Ghost the Musical is only in Edinburgh for a week – make sure to go and see it while you can!