As the curtain rose at the Edinburgh Playhouse last night and the Grease orchestra launched into an overture featuring a melody of the musical’s most recognisable hits, the enthusiastic whooping, singing and dancing from the audience quickly set the tone for the evening. 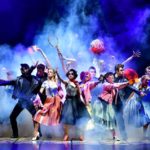 high school musical manages to do its popularity justice. Based on the 1971 musical and 1978 cult film of the same name, which starred Olivia Newton-John and John Travolta in the leading roles, Grease follows the blossoming teenage love story of Danny Zuko and Sandy Olsson in 1950s America.

Pop band The Wanted’s Tom Parker and Over the Rainbow winner Danielle Hope (The Wizard of Oz, The Sound of Music) led the cast, with Hope in particular excelling in her role as Sandy, the goody two shoes come vixen. Her powerful vocal performance during Hopelessly Devoted to You was a shining example of how to make an iconic role your own. Parker, whose performance in this UK tour marks his theatrical debut, was clearly a popular addition to the cast but, whilst he is undoubtedly a very capable singer and dancer, his voice lacked the power to compete with many of his fellow cast members, most noticeably during Summer Nights and You’re the One that I Want. Rosanna Harris (Spring Awakening, Half a Sixpence), on the other hand, was a complete joy to watch as Jan as her comedic timing and mannerism were absolutely spot-on throughout.

For a fun, nostalgic night out that will leave you feeling good, Grease is still the one that you want. Be quick, though – the show’s only in Edinburgh until Saturday!