It isn’t Christmas in Edinburgh until Grant Stott, Allan Stewart and Andy Gray take over The King’s Theatre with a delightfully silly pantomime.

This year, Jack and the Beanstalk has been chosen to provide the vague storyline that acts as a basis for their extravagant festive shenanigans. When Princess Apricot (Rachel Flynn) is kidnapped by evil Fleshcreep (Stott), Jack (Greg Barrowman) is forced to sell his family’s beloved ‘coo’ for a bag of magic beans so he can set out to save his one true love. 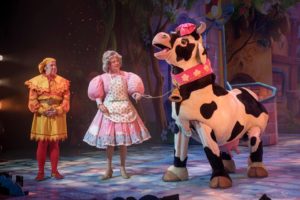 From the moment the curtain goes up, Stott captivates the audience with his villainous portrayal of Leith-born Fleshcreep, introducing himself with a fantastic, tongue-in-cheek performance of I’m Sexy and I Ken It that sets the tone for the evening. With his constant references to Edinburgh and familiar voice, Stott consistently manages to tow the line between scary and comical, ensuring even the most sensitive of children are able to enjoy the show without fear.

As always, Stewart and Gray are a dynamatic double-act, interacting with members of the audience (be worried if you’re sitting in the front row!) and taking toilet humour to the next level. Their topical references are clever and appropriate, with an updated skit about Scottish politics proving to be incredibly popular with the adults.

Greg Barrowman (Jack) and Rachel Flynn (Princess Apricot) are both in fine voice throughout and manage to hold their own whilst sharing the stage with the panto dream team. An energetic performance of Talk to the Animals from Dr Doolittle is a particular highlight with the kids, whilst the show also features some of the year’s most successful pop songs including Justin Timberlake’s Can’t Stop the Feeling and Walk the Moon’s Shut Up and Dance.

This year, the show’s set is strikingly vibrant and the production team have made great use of technology, choosing to feature a beanstalk that grows to the height of the theatre and a flying helicopter.

If you love old-fashioned pantomimes, it simply doesn’t get much better than Jack and the Beanstalk. Worth seeing? Oh yes it is!