“Are people born wicked, or do they have wickedness thrust upon them?” ponders Glinda the good witch, shortly after the curtain rises at The Edinburgh Playhouse. The answer to this question is intelligently explored throughout Wicked, the smash-hit musical which tells the story of how her unlikely friendship with Elphaba, the Wicked Witch of the West, came to be. 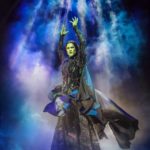 internationally more than a decade after it premiered in London’s West End. Whilst expectations were exceptionally high for the show’s return to Edinburgh, the fantastic cast turned in a stellar performance on opening night which justified the hype and left the majority of the audience spellbound.

Amy Ross (Kinky Boots, Mama Mia!, Legally Blonde: the Musical) made the audience fall in love with misunderstood Elphaba with her portrayal of the character whilst Helen Woolfe’s comedic timing meant she was absolutely hilarious as “Ga-linda”. Whilst both performers have stunning voices, Ross delivered a breathtaking performance of Defying Gravity at the end of the first act which was worth the ticket price alone.

Eugene Lee’s elaborate clock set is striking and provides the perfect backdrop for such a high-profile musical whilst Susan Hilferty’s edgy costumes are a sight to behold.

Wicked is one of those rare musicals with such universal appeal that everyone should see at least once in their life, regardless of whether they are fans of musical theatre – miss your chance to see it in Edinburgh and you’ll be green with envy!

Wicked runs at the Edinburgh Playhouse until Saturday 9 June. Tickets are available from £22.50.