The Rolling Stones’ Ronnie Wood has said the rock legends, who recently completed their historic trip to Cuba, are hoping to release a new album before the end of the year.

Speaking at the opening of the new Rolling Stones exhibition at the Saatchi Gallery in London last night (April 4), guitarist Wood said the band are planning to release new music in 2016 and revealed the group are on a “blues streak” after covering standards by the likes of Howlin’ Wolf and Little Walter.

The band recently spent a few days in the studio, where they recorded some new originals alongside nearly a dozen blues covers. 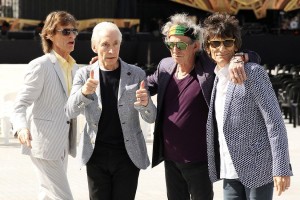 “We went in to cut some new songs, which we did,” said Wood. “But we got on a blues streak. We cut 11 blues in two days. They are extremely great cover versions of Howlin’ Wolf and Little Walter, among other blues people. But they really sound authentic… When we heard them back after not hearing them for a couple of months, we were, ‘Who’s that? It’s you.’ It sounded so authentic.”

It’s been known for some time the Stones are working on new music. In an interview with Rolling Stone magazine in October, Keith Richards said he hoped the Stones would soon reconvene in the studio.

“I don’t know where, and I don’t know when yet, but yeah,” Richards said. “I was in London last week, and all the boys, we had a little chat. We’re playing South America in February of next year. We were just talking and were like, ‘Well, we’ve got to get back in the studio. That’s agreed? Agreed. Right, OK boys. Where? When?’ We scratch our heads. That I don’t know quite yet.

“I would say off the top of my head, I would say after the South America thing, but you never know,” added Richards. “We might try and get in the studio before Christmas, maybe. I think that’s sort of doubtful, because Christmas, and you know, that build up. But hopefully it’s in the works.”

The Rolling Stones released their most recent album, A Bigger Bang, in 2005.