“Ronnie Corbett CBE, one of the nation’s best-loved entertainers, passed away this morning, surrounded by his loving family,” Corbett’s publicist said in a statement.

“They have asked that their privacy is respected at this very sad time.”

Corbett, who was educated at the James Gillespie School and the Royal High School, appeared alongside the late comedian Ronnie Barker in The Two Ronnies for 16 years. Barker passed away in 2005.

As a tribute to the legendary comedian, we’ve assembled a selection of his funniest moments.

Here are some of Ronnie Corbett’s best jokes:

We’ve just heard that a juggernaut of onions has shed its load all over the M1. Motorists are advised to find a hard shoulder to cry on.

A cement mixer collided with a prison van on the Kingston by-pass. Motorists are asked to be on the look-out for 16 hardened criminals. 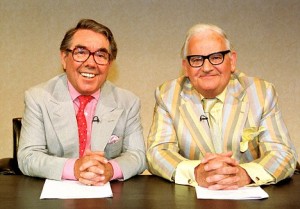 French wine growers fear that this year’s vintage may be entirely spoiled due to the grape treaders’ sit-in.

We will be talking to an out of work contortionist who says he can no longer make ends meet.

There was a fire at the main Inland Revenue office in London today, but it was put out before any serious good was done.

All those who believe in psychokinesis raise my right hand.

We’ve just heard that in the English Channel, a ship carrying red paint has collided with a ship carrying purple paint. It is believed that both crews have been marooned.

West Mercia police announced tonight that they wish to interview a man wearing high heels and frilly knickers, but the chief constable said they must wear their normal uniforms.

It was revealed in a government survey published today that the prime minister is doing the work of two men, Laurel and Hardy.

We’ll be talking to a car designer who’s crossed a Toyota with Quasimodo and come up with the Hatchback of Notre Dame.

After a series of crimes in the Glasgow area, Chief Inspector McTavish has announced that he is looking for a man with one eye. If he doesn’t find him, he’s going to use both eyes.

A grandfather has gone missing after eating four cans of baked beans, two cauliflowers and a jar of gherkins. His family have made an emotional appeal for him not to come home for at least a fortnight.

For some time, my wife’s had this ridiculous idea that I’m playing too much golf. Actually, it came to a head at about 11.30 last night. She suddenly shouted at me: “Golf, golf, golf. All you ever think about is bloody golf!”. And I’ll be honest, it frightened the life out of me. I mean, you don’t expect to meet somebody on the 14th green at that time of night.

This joke dates back to 256 BC which, as scholars of ancient Egypt will know, was the year of the famous wildcat strike by the amalgamated union of eunuchs and allied sopranos, in a dispute over severance pay.

Offers of work have been flooding in. Last week I was invited to go on a round-the-world cruise. By the chairman of the Flat Earth Society.

This week I was asked to do a very important after-dinner speech. I said, ‘Do you want me to be funny?’ They said, ‘No, just be yourself.’