Edinburgh-born novelist Sara Sheridan writes cosy crime noir mysteries set in 1950s Brighton and historical novels based on the real-life stories of late Georgian and early Victorian explorers. She has also written for children – her picture book I’m Me has appeared on CBeebies three times.

In 2015, Sara was named one of the Saltire Society’s 365 most influential Scottish women, past and present. Sara is also patron of registered Edinburgh charity It’s Good 2 Give, which provides support for critically ill children and their families.

Sara has two books out in 2016: the fifth Mirabelle Bevan Mystery, Operation Goodwood and an historical novel set in the chocolate industry in Brazil and London in 1825: The Melting Point.

As reported on AAA Edinburgh this week, Sara is set to have her bestselling mystery novels turned into a new television series on STV by the makers of Rebus and Taggart.

Most memorable Capital event?
I love the Hogmanay torchlight procession. It feels like a real connection to history. When I can’t go, I stalk photographs of it on the internet.

Who would you choose to headline Edinburgh’s Hogmanay?
The Young ‘Uns. They are a brilliant, powerful folk trio. I really enjoy their waspish brand of political activism and acapella harmony. 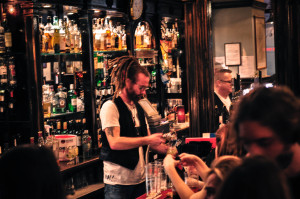 Favourite old-fashioned boozer?
Sandy Bells. Me and my old man go there sometimes for the music.

Favourite restaurant?
El Cartel on Thistle Street. Best. Margaritas. Ever. Amazing guacamole. I’m a restaurant tart though so that might change.

Do you love or loathe the trams?
I feel nothing. I’ve been on a couple of times. I wanted to get them but so far no dice.

Do you love or loathe the Festival?
Love it until week 3. Then love to loathe it.

Favourite art gallery?
The Scottish Gallery on Dundas Street. I like the mixture of arts and crafts. And they have jewellery. Though the RSA is about to be my favourite for a limited period, because my friend,the  artist, Sophie McKay Knight painted some pictures of me and one is going on display in the RSA’s Winter exhibition.

Favourite cinema?
No 10 at the multiplex at Fountain Park. Honest. It’s where BAFTA Scotland screenings are held.

Favourite live music venue?
I often get tickets for the Queen’s Hall. It’s well placed. You can nip out for a kebab in the interval.

Favourite walk in or around the city?
I am an urban walker. I love the moon so I often go for walks at night. You know that Edinburgh thing when you turn a corner and see a view you haven’t noticed before? That. Mostly for me, it’s the New Town. Robert Louis Stevenson would be proud.

Favourite shopping area?
Thistle Street. It’s a hidden gem. I’m also a sucker for Stockbridge. We have some cracking independent shops in Edinburgh.

Favourite piece of architecture?
The house at the end of the Dean Bridge. It’s a wizard’s house, Harry.

What’s the biggest change you’ve seen in the city?
The traffic system. When I was little Mum used to park outside James Allan on Princes Street and we’d go in for shoes. I don’t feel this is a change for the better.

Favourite festival?
The Book Festival, of course. I went as a kid and never dreamed in a million I’d actually be on. I get excited every year when the tents go up.

Favourite Edinburgh-set novel?
The Prime of Miss Jean Brodie with Marabou Stork Nightmares (a bit of a contrast) coming in a close second.

Favourite Edinburgh writer?
Muriel Spark. My parents knew her. I feel her presence. That’s weird, I know. But I do.

Sell Edinburgh to a tourist in no more than ten words…
Come down this close. There’s something of historical interest.