Fast-rising songstress Saraswati has announced the release of her hotly-anticipated debut album.

It has been an amazing year for the enigmatic singer-songwriter, who has been compared to the likes of Sade and Lauren Hill. 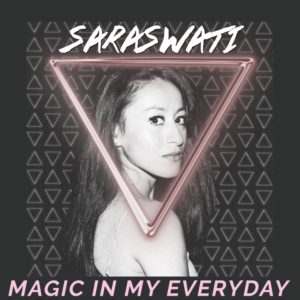 Her earlier EP release met with critical acclaim and two tracks were hand picked by cult movie producer Noel Clark for the latest smash-hit movie, The Brotherhood. Bad Habits and Sweet Little Bassline featured in the movie and have attracted a real underground following of fans.

Saraswati has had an interesting start to life. She was born and brought up in an orphanage in Nepal, where her only sibling was adopted and taken to the UK as a youngster. After some time, her sister had eventually learned enough English to tell her adopted mother that she had left someone behind and immediately they went back for her and the siblings were reunited.

Saraswati always found solace in songs and music and she has seamlessly managed to combine the influences of both cultures from her birth land and in the UK – the country she now calls home.

Her debut album, Magic In My Everyday, is testament to her deep-rooted love of hip-hop, soul and reggae – all delivered with an understated beauty and a natural pop twist.

To end the year on a high with release of her album she will perform a series of concerts in the UK – including dates in London, Leeds and Glasgow, with more to be announced.

“I have been working hard doing so many little gigs up and down the country to get my music out there and I’m so happy with the response to the shows and my music,” she says.

“From playing small basement shows in Leeds, Glasgow and London to being asked to play Party at the Palace in Linlithgow recently, has been fantastic experience for me. What an incredible year so far.”

Magic In My Everyday will be released on 11 November and is available to pre-­order on iTunes now.

For more information on Saraswati, visit her official website: www.saraswati.co.uk

Dublin post-punks Fontaines D.C. will give fans a glimpse of what