Ahead of their upcoming visit to Scotland, We Are Scientists, the Brooklyn-based indie outfit, have been speaking about new album Helter Seltzer, which is released tomorrow (April 22).

The popular duo, who stepped into the spotlight in 2005, have also just revealed new single Too Late, which is accompanied by a bizarre and amusing video, which you can watch below.

Following massive success with hits such as Nobody Move, Nobody Get Hurt and After Hours, Helter Seltzer retains the band’s signature quirks, charm and humour, whilst delivering a poppier more melodically addictive sound than ever. 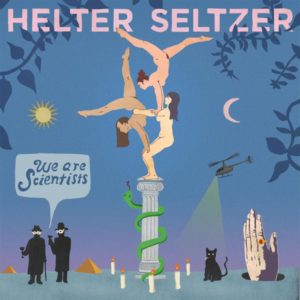 “We’ve always made overtures toward being a pop band, but we’ve generally had the inclination to obscure those pop leanings in grit and chaos — to screw them up with fuzzed-out tones and raucous performances,” says guitarist and vocalist Keith Murray, whose band play the Live At Glasgow music festival on Sunday, 1 May . “It’s made us really think about what our musical genre is.

in making our songs

as pretty as possible”

“We’re not punk – we’re too interested in making our songs as pretty as possible,” continues Murray. “We’re not straight-up rock – our tastes are too left-of-centre. We’re not indie-rock – our heads aren’t far enough up our own butts. So finally, after putting as much time into thinking about it as we’re apt to – about ten minutes, over beers – we decided that our genre is Helter Seltzer.”

Bassist Chris Cain pitches in, saying, “Declaring a new genre is obviously douchey as hell, though, and impossible to deliver with a straight face, so we did the noble thing and just made Helter Seltzer the album title.

“It’s especially apt for us these days, though. The songs here are more effervescent than we’ve ever managed to deliver, but they’ve still maintained a measure of that Helter Skelter element – no matter how fizzy and refreshing the tunes are, they’ve always got a bit of that seamy, scuzzy, ‘cult on Spahn Ranch’ vibe.

“We therefore consider this album, as a vessel of both sweet pop tunes and seltzer outreach, to be a work of undisguised philanthropy on our part,” concludes Cain.

Helter Seltzer is released on Friday, 22 April via 100% Records