It was the moment fans have waited years for – and it arrived on Nick Grimshaw’s BBC Radio 1 breakfast show this morning as Adele’s comeback single, Hello, was played in full for the first time anywhere in the world.

The multi-million selling singer had already revealed her third album, 25, will be released on November 20 – and she admitted she was nervous ahead of the first airing of her new single.

“I feel so sick. I’m so nervous,” she told Grimshaw after arriving in the studio.

“I obviously want people to like it,” she added, moments before the song’s debut. “I knew this would be the first thing everyone heard from me.” 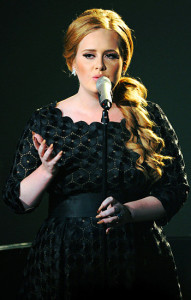 Judging by the reaction the song received on social media, Adele needn’t have been nervous.

Adele’s last album, 21, released in 2011, is believed to have been penned about a failed relationship with a mystery ex- but earlier this week she described new album 25 – her first new music since 2012’s Oscar-winning single Skyfall – as a “make up record”.

The unparalleled success  21 – which is the biggest-selling album of the decade to date – has meant Adele has become one of the most famous people on the planet. But she says she still lives a normal life.

“Fame is not real. And I don’t want to live a fake life,” she told Grimshaw.

“Sometimes I have my moments, but not that often, when I think it would be a lot easier to be on a yacht all the time.

“I find fame quite frightening and I find it really toxic. It’s very charming and it’s very persuasive but it doesn’t last so why would you want to get involved in something that you will miss so much when it’s gone – and it always goes.”

Adele’s much-anticipated third record has been shrouded in secrecy prior to the release of Hello this week – and the singer said it’s been so hard to keep it under wraps in an age where new albums are leaked long before their release.

“I want to surprise people,” said Adele. “I don’t want to say something for the sake of it.

“We’ve been sitting on it [the album]. There have been five people doing 300 people’s jobs.”