It’ll be a green Christmas in Edinburgh this year as Shrek the Musical returns to the Edinburgh Playhouse for an extended run.

The larger than life production, which has previously enjoyed successful runs on Broadway and in 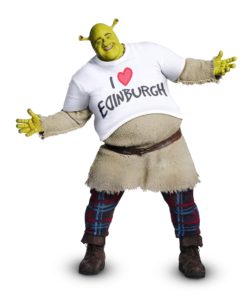 London, will kick of a brand new UK tour in the Capital this December. The show will be directed by Nigel Harman, who originated the role of the villainous Lord Farquaad at London’s  Theatre Royal Drury Lane in 2011 and won a Olivier Award for his performance.

Hardman said: “I had so much fun directing the original UK & Ireland Tour that I jumped at the chance to work on it again. Shrek the Musical has created pivotal moments in my career – firstly winning an Olivier and then my directorial debut. It’s certainly become one of the classic family musicals of all time and I’m really proud to be a part of it.”

Based on the story and characters from William Steig’s book Shrek! and the Oscar-winning movie of the same name, this production features music by Jeanine Tesori and set design from Tim Hatley. The all-singing, all-dancing extravaganza features over 100 different fairytale characters and a 14ft dragon.

Shrek the Musical was enjoyed by nearly 800,000 people on its first UK and Ireland tour as it visited 25 major venues in 20 months. Shrek the Musical returns to the Capital later this year after enjoying a successful run at the Edinburgh Playhouse in October 2015. Whilst casting for the latest tour is still to be announced, Girls Aloud star Kimberley Walsh and Britain’s Got Talent’s Amanda Holden are among those to have portrayed Princess Fiona.